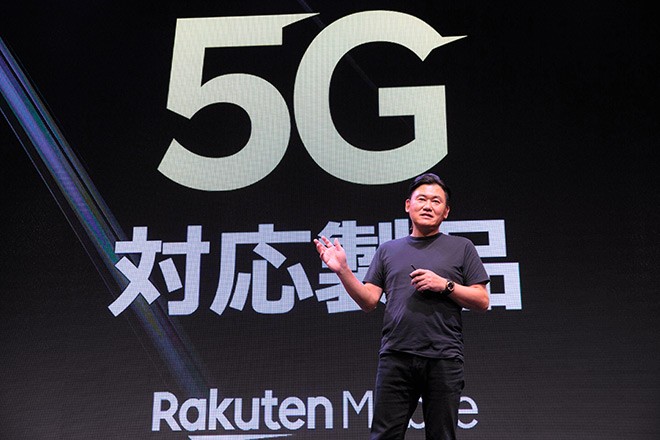 Rakuten Inc. Chairman and CEO Hiroshi Mikitani explains about 5G service to be provided by a subsidiary during a news conference in September 2020. (Provided by Rakuten Mobile)

Online retailing giant Rakuten Inc. announced completion of its largest-ever capital injection even as government officials were raising concerns over the financing.

The government is concerned that the deal poses a national security threat because one of the entities investing in the company is a subsidiary of a major Chinese company.

Included in the approximately 240 billion yen ($2.2 billion) invested in Rakuten is about 65.7 billion yen contributed by a subsidiary of Chinese information technology company Tencent Holdings Ltd.

One reason that government officials are raising national security concerns is because Rakuten did not inform them about the major capital injection plan prior to announcing the deal on March 12, according to several government sources.

The Tencent subsidiary will gain a 3.65-percent stake in Rakuten, making it the sixth largest shareholder.

After Rakuten’s announcement on March 12, high-ranking administration officials instructed relevant agencies to look into the matter.

According to sources, government officials soon thereafter passed on to Rakuten officials their concerns that allowing Tencent to invest in the company could carry risks related to Rakuten's business in the United States.

Tencent is one of the representative companies of the ongoing economic battle between China and the United States.

Former U.S. President Donald Trump, while in office, issued an executive order that attempted to ban the use of Tencent's WeChat app.

In 2019, Rakuten said it was entering into a capital and business partnership arrangement with Altiostar Networks Inc. on the precondition of approval from the U.S. Committee on Foreign Investment in the United States (CFIUS).

A government source said Altiostar Networks possessed highly advanced technology related to 5G wireless network service, a sector where the United States and China have been involved in fierce competition.

The CFIUS reports to the U.S. president when it is concerned about a possible national security threat due to investment by a foreign company.

Japanese government officials have informed their U.S. counterparts that measures would be taken to ensure that leakage of personal information and technology does not arise through the capital injection in Rakuten.

Rakuten also issued a statement that said national security concerns would not arise because the information it possessed was blocked from all shareholders and that shareholders would not become involved in company management or data.

But government officials still plan to check out the Tencent subsidiary because according to sources it failed to notify the Finance Ministry of its plan to invest in Rakuten.

That is a requirement under the Foreign Exchange and Foreign Trade Law of all foreign companies thinking about a direct investment.

But one condition for exempting a foreign company from submitting a notification beforehand is that it will not access undisclosed technological information held by the company to be invested in.

Finance Ministry officials also plan to examine whether any illegalities arose from the investment in Rakuten.

(Naoyuki Fukuda contributed to this article.)