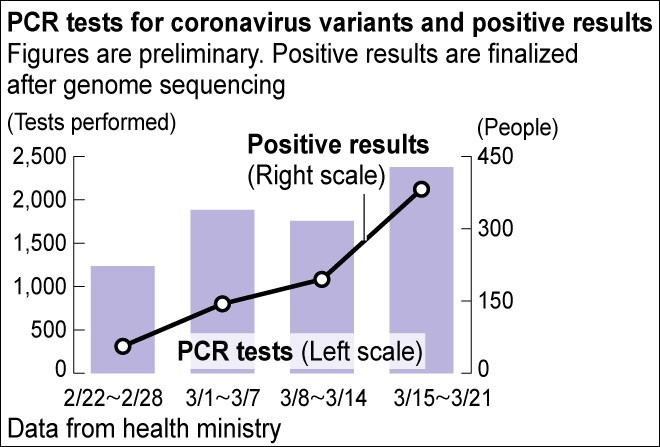 More contagious variants of the novel coronavirus have accelerated their spread around Japan, prompting calls for the public to take extra precautions to prevent a potentially dire situation for the entire nation.

According to health ministry data, 1,200 COVID-19 patients tested positive for variant strains in the accumulated total to March 30, up by 408 from the previous week.

The ministry’s expert panel on COVID-19 predicted the variants will continue to circulate widely and urged the public not to let their guards down.

The Ministry of Health, Labor and Welfare tracks the number of patients infected with new strains after performing polymerase chain reaction (PCR) tests to identify variants from collected samples.

Information on such patients is registered in the government’s HER-SYS system, which includes overall data on COVID-19 patients, including symptoms, infection routes and behavior history.

Figures from March 15 to 21 showed that 382 patients tested positive for variants. Hyogo Prefecture reported the largest number of variant infections, with 128.

Hyogo and four other prefectures, including Hokkaido and Osaka, accounted for 80 percent of the variant cases confirmed in Japan.

But these numbers may represent only a small fraction of the actual spread.

Health authorities perform PCR tests for new strains on only 5 to 10 percent of COVID-19 samples.

The government plans to raise the ratio to 40 percent to more accurately gauge the spread of the variants.

Positive tests for variants are finalized only after genome sequencing is performed on those who tested positive.

By March 30, 678 people in 34 prefectures had been confirmed infected by variants, excluding people whose infections were detected during quarantine at airports and ports.

The figure is up 129 from the preceding week.

People in their 40s accounted for 16 percent of all patients confirmed infected with variants, the largest age group. Children 9 years old or younger represented 12 percent of the total, while 11 percent were teenagers.

In contrast, children 9 or younger made up 3 percent and teenagers about 7 percent of novel coronavirus infections before the more transmissible variants were detected in Japan.

The variants are also affecting rural areas where the health care systems have limited resources.

In Matsuyama, Ehime Prefecture, more than 20 people tested positive for variants. They were infected at gatherings at multiple restaurants in the city’s entertainment district.

Five people, from their 40s to 80s, were infected with variants at a pub in Sapporo.

The most common variant in Japan was first detected in Britain in September. Its rapid spread forced Britain to impose a strict lockdown three months later.

Mitsuyoshi Urashima, professor of molecular epidemiology at the Jikei University School of Medicine, warned that when more transmissible strains circulate, their infection trajectory could be different from that of the novel coronavirus last year.

“Even if the ratio of variants among overall infections is not large at the moment, the strains can spread all over the country in one go once they hit a certain level,” he said. “We need to be thorough in public behavior to protect ourselves from the variants.”

(This article was written by Hajime Mikami and Kenta Noguchi.)