JMA will stop calling temblors an aftershock of 3/11 quake 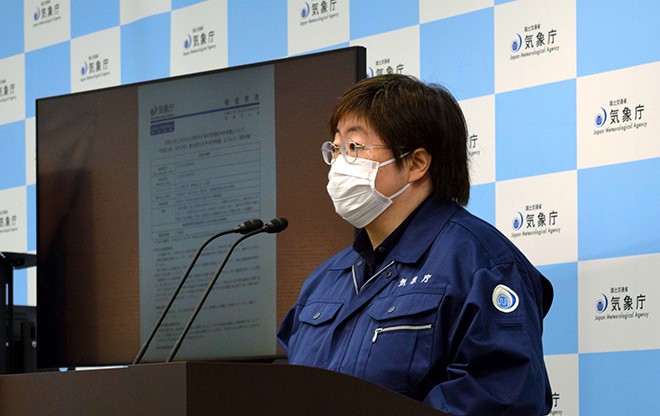 An official of the Japan Meteorological Agency speaks at a news conference in Tokyo’s Minato Ward on March 20 after a quake occurred in Miyagi Prefecture. (Ryo Yamagishi)

Ten years after the Great East Japan Earthquake, the Japan Meteorological Agency will no longer describe a quake occurring off Tohoku as "likely an aftershock," starting from April 1.

That's because the frequency of such quakes occurring has declined over the years and reached the level of the annual average recorded before the massive 2011 quake.

“It is now difficult to clearly determine if a quake is an aftershock of the 2011 one or not,” the JMA said.

After the Great East Japan Earthquake, the JMA designated a rectangular-shaped region stretching from Tohoku to the offing of Chiba Prefecture as an "aftershock area."

All temblors in the lower 5 or greater on the Japanese seismic intensity scale of 7 occurring within the region were called a possible aftershock of the 2011 quake.

In general, it is difficult to scientifically determine if an earthquake is an aftershock. But the JMA decided to continue using the description as a means of warning the public.

However, as it marked the 10th anniversary of the disaster in March, the agency decided to stop using the description.

From now on, the Headquarters for Earthquake Research Promotion, set up by the central government, will alert the public based on a long-term evaluation that covers seismic probability and estimated scale in each coastal area.