A surfeit of plastic waste is spotted on the seabed nearly 6,000 meters deep off the Boso Peninsula in Chiba Prefecture. (Provided by the Japan Agency for Marine-Earth Science and Technology) 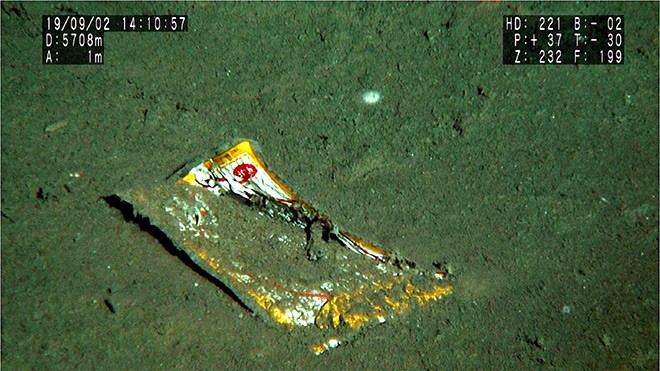 A plastic hamburger packet from 1984 spotted on the seabed more than 5,700 meters deep off the Boso Peninsula in Chiba Prefecture in September 2019 (Provided by the Japan Agency for Marine-Earth Science and Technology)

Plastic waste has accumulated at a final destination nearly 6 kilometers deep on the seabed off the Boso Peninsula in Chiba Prefecture, scientists have discovered.

An average of 4,561 pieces of disposable and other plastic products were found per 1 square kilometer at three points in the area, according to a survey conducted by the Japan Agency for Marine-Earth Science and Technology (JAMSTEC).

“The abyssal seafloor off the Boso Peninsula, where whirlpools are produced by the Kuroshio current, turned out to be an accumulation spot for plastic waste,” said Ryota Nakajima, a vice chief researcher at JAMSTEC.

More than 10 million tons of plastic waste is estimated to pour into the seas around the world annually. A report by the U.N. Environment Program said 440,000 tons, including tiny plastic pieces called microplastics, travel near the surface. But where the plastics eventually reach has been largely unknown.

JAMSTEC chose the seafloor off the Boso Peninsula as a possible sinking site for plastics because the Kuroshio current swirls there after running northward along the Pacific side of the Japanese archipelago from the East China Sea.

JAMSTEC’s calculations show plastic waste sinks in a week or so. Plastics are believed to accumulate in deep waters because they are not broken down by ultraviolet rays, waves and other factors once they enter the abyss.

The Shinkai 6500 manned research submersible was used for the study from August to September 2019.

Visually identified plastic pieces were tallied in three points about 500 km from the Boso Peninsula at depths ranging from 5,718 meters to 5,813 meters. The number of plastic pieces found per square km at each point was 7,021, 2,149, and 4,512.

Bags, food packages and other types of disposable plastic products accounted for more than 80 percent of the total.

Among them was a hamburger packet with its production year--1984--still legible.

The researchers surveyed Sagami Bay in Kanagawa Prefecture for comparison and discovered 1,950 plastic pieces. Past expeditions in and outside Japan reportedly found fewer than 100 plastic pieces on average in the ocean’s depths.

The findings were published in Marine Pollution Bulletin, a British journal on oceanic contamination, in March.

“We can see whether we will have succeeded in stopping plastic waste from flowing into the sea if another study is carried out several years from now,” Nakajima said.

JAMSTEC plans to survey the seabed off the Pacific coast of the Shikoku region this summer because the Kuroshio current also generates whirlpools there.