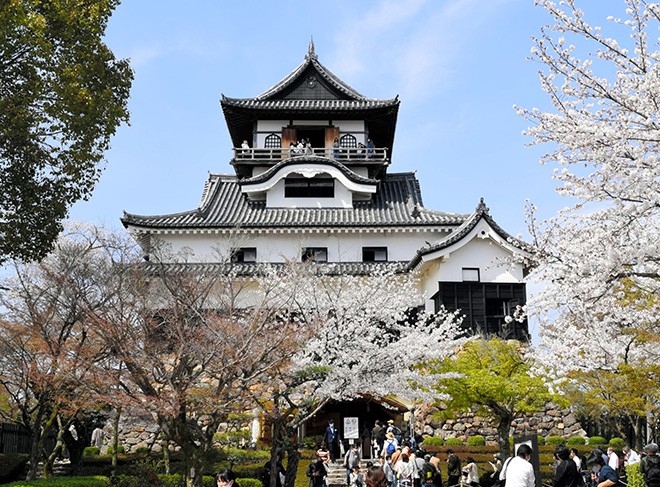 The keep of Inuyama Castle in Inuyama, Aichi Prefecture, already had its upper-floor watchtower when it was built in the late 16th century, a study showed. (Yoshihiro Ogino)

INUYAMA, Aichi Prefecture--It may sound trite, but the keep of Inuyama Castle here really was built for keeps.

A tree-ring analysis showed that the three-tiered, four-storied donjon was built between 1585 and 1590, making it the oldest among the nation’s 12 remaining original castle keeps, the municipal board of education said.

The board also said the keep’s four floors were likely constructed successively, although a study conducted during repairs between 1961 and 1965 suggested that the third and fourth levels were added later.

“A significant finding is that the keep already had its upper-floor watchtower when it was built just as it does now,” Kazuyoshi Fumoto, a professor of architectural history at the graduate school of Nagoya Institute of Technology, told a news conference in March.

Commissioned by the education board, Fumoto studied the keep of Inuyama Castle, designated a national treasure, with Takumi Mitsutani, a visiting researcher at the Nara National Research Institute for Cultural Properties, known for its expertise on tree-ring dating.

An analysis of growth rings confirmed that a pillar straddling the first and second floors and a beam supporting the fourth floor were made from Japanese cypress trees cut down in 1585 and 1588, respectively.

The floorboards and other parts of the fourth level were also made from timbers presumed to have been felled between 1585 and 1588.

The use of an adz, spear plane and other tools left traces unique to carpentry in those days on the surface of the timbers.

Fumoto said Inuyama Castle was commissioned by Oda Nobukatsu, a son of warlord Oda Nobunaga, after the 1584 Battle of Komaki and Nagakute, where he fought against Toyotomi Hideyoshi with Tokugawa Ieyasu, founder of the Tokugawa Shogunate.

Inuyama city government officials previously said the donjon was built in 1537, earlier than the 11 other remaining castle keeps.

The 11 castles include Matsumoto Castle in Nagano Prefecture, built in the late 16th century, and Hikone Castle in Shiga Prefecture, dating from the early 17th century.

However, the Agency for Cultural Affairs dates the keep of Inuyama Castle to 1601 in its cultural property database and elsewhere.

According to Fumoto, questions remained about both theories over the age of the castle’s stone wall and other elements.