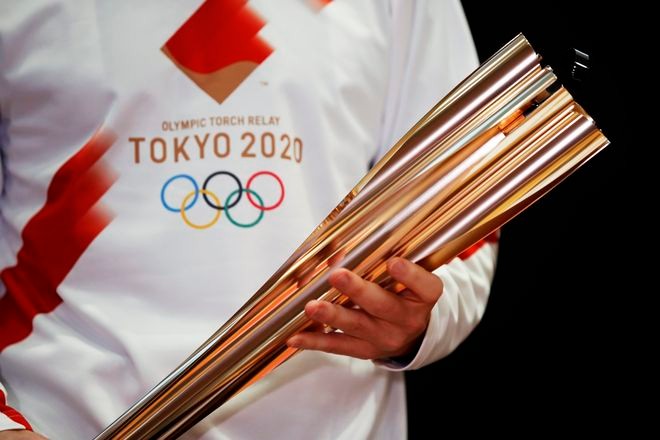 OSAKA--With the Olympic torch scheduled to arrive in two weeks, the Osaka prefectural and city governments are calling for the event to be canceled in Osaka city, following a recent spike in COVID-19 cases in Osaka Prefecture.

“It should be canceled in Osaka city,” Osaka Governor Hirofumi Yoshimura said on April 1.

Osaka Mayor Ichiro Matsui also said at a news conference the same day, “It’s extremely regrettable, but I think we should call off the torch relay.”

The Osaka prefectural and city governments will discuss the request with the Tokyo Olympic organizing committee.

The torch relay began on March 25 in Fukushima Prefecture. The torch is scheduled to pass through areas in Osaka Prefecture over two days from April 13.

Osaka city plans to hold a welcoming event in front of the Osaka City Central Public Hall on April 14, when the flame is due to arrive in the city.

“We have no choice but to hold it (the event) without spectators,” said Matsui.

The Osaka prefectural government asked the central government for stronger measures against the spread of the novel coronavirus. They are expected to be applied for the prefecture, which reported 599 new COVID-19 cases on March 31, as early as April 5.

The pre-emergency measures, based on the revised special measures law on dealing with the COVID-19 pandemic, designate restrictions on certain businesses and areas in a prefecture.

Yoshimura said that he is calling for the cancellation of the torch relay in Osaka city because people should refrain from going out unless absolutely necessary in areas to be covered by the measures.