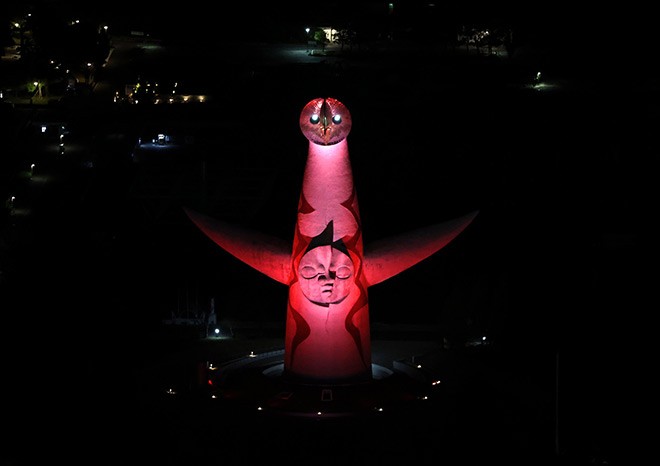 The “Tower of Sun” in Suita, Osaka Prefecture, appears in red to reflect the prefectural government’s issuance of a “red alert” concerning the COVID-19 situation on Dec. 3. (Yuki Shibata)

The surge in new infections in the prefecture and surrounding areas prompted the Hanshin Tigers professional baseball team to announce a suspension of ticket sales for a series against the Yomiuri Giants at Koshien Stadium in Nishinomiya, Hyogo Prefecture, from April 6 to 8.

The Tigers, who have a large and loyal fan base mainly in the Kansai region, are scheduled to play three night games against their Central League rivals to open the season at Hanshin’s home stadium.

The team said it made the decision because the central government has approved pre-emergency measures for cities in Hyogo Prefecture, as well as in Osaka and Miyagi prefectures, from April 5 to stem the increase in new COVID-19 cases.

“We will suspend ticket sales until the situation becomes clearer,” a team official said.