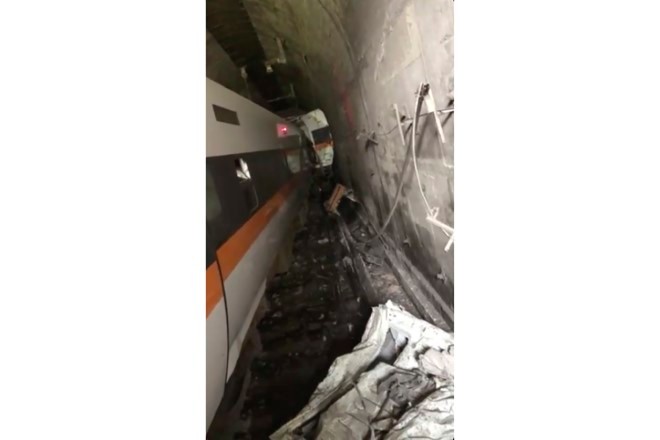 In this image made from a video released by Ministry of Interior, National Fire Department, a train is stranded in a tunnel in Hualien County in eastern Taiwan on April 2. (AP Photo)

TAIPEI--A train derailed in a tunnel in eastern Taiwan on Friday after apparently hitting a truck, with at least 36 people feared dead and more than 72 injured, as rescuers struggled to reach crushed carriages, the government said.

The train, traveling to Taitung, came off the rails in a tunnel just north of Hualien causing some carriages to hit the wall of the tunnel, the fire department said in a statement.

The transport ministry put the death toll in the island’s worst rail disaster in more than three decades at 36. More than 72 people were injured, with around 60 already sent to hospital.

The train was carrying around 350 people, and rescue efforts are ongoing, the fire department said.

Between 80 to 100 people have been evacuated from the first four carriages of the train, while carriages five to eight have “deformed” and are hard to gain access to, it added.

“Is everyone out in carriage four?” a lady is heard shouting from inside the tunnel, in images provided by the fire department.

The official Central News Agency said a truck that was “not parked properly” was suspected of sliding into the path of the train. The fire department showed a picture of what appeared to be the truck’s wreckage lying next to part of the derailed train.

“Our train crashed into a truck,” one man said in a video aired on Taiwanese television, showing pictures of the wreckage. “The truck came falling down.”

The front part of the train was situated outside the tunnel, and those in carriages still in the tunnel were being led to safety, Taiwan’s railway administration said.

Images of the crash scene show carriages inside the tunnel crumbled and ripped apart from the impact, passengers gathering suitcases and bags in a tilted, derailed carriage and others walking along the tracks littered with wreckage.

The accident occurred at the start of a long weekend for the traditional Tomb Sweeping Day.

In 2018, 18 people died and 175 were injured when a train derailed in northeastern Taiwan.