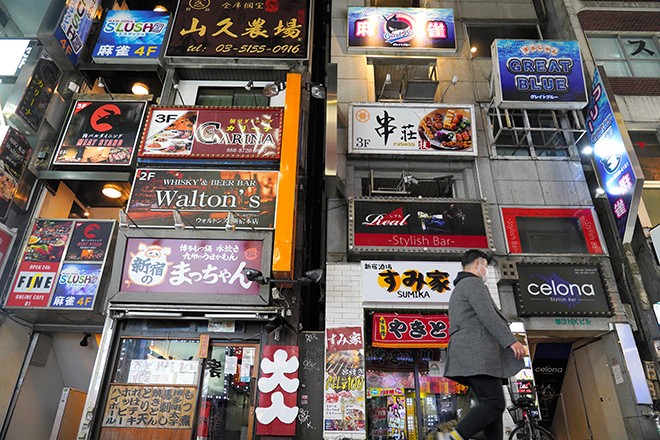 Signs remain off for many of the bars and restaurants located in this building in Tokyo's Kabukicho district. (Asahi Shimbun file photo)

A state of emergency declared over the spread of novel coronavirus variants in Japan could cause an economic loss of about 7 trillion yen ($63 billion), according to two University of Tokyo economists.

The study was conducted by Taisuke Nakata, an associate professor of economics at the University of Tokyo, and Daisuke Fujii, a specially appointed lecturer at the same university’s Economics Faculty. They have previously made gloomy forecasts about the effects of the COVID-19 pandemic on the Japanese economy.

In the latest simulation, the two economists set the variant strain as being 1.5-fold more infectious than the novel coronavirus. They also used two different rates of the spread of infection.

One was the British variant that caused a much faster infection spread, while the other was the American strain that circulated at a slower pace.

The economists found that if the spread of the variant in Britain occurred at a similar level in Tokyo, it would take about four months for the British strain to completely replace the previous novel coronavirus in the Japanese capital.

It would take about a year for the American case to unfold in Tokyo, they said.

The economists estimated the number of daily new infections in Tokyo based on those assumptions.

Even under the more optimistic American version, daily new COVID-19 cases would exceed 1,000 by July in the capital, leading to the need for another declaration of a state of emergency.

If the British scenario unfolded, 1,000 daily new infections would be reached in June.

The more virulent strains are expected to cause more economic damage because tougher measures would be needed to halt their spread, leading to major declines in economic activity.

The study also compared the situations in the Kanto and Kansai regions.

Although the economists did not foresee a sudden surge in variant strain infections in Tokyo over the next three to four weeks, the increase in those infections in Osaka Prefecture over the 10-day period from March 21 was much higher than past estimates. They speculate the variant strains may already be affecting economic activity in the Kansai region.

Nakata said that delaying a spread of variant strain infections in the Tokyo area by even a month would have major positive effects on the economy, given that the Kanto region accounts for a large portion of the gross domestic product.

“With variant strain infections in the Kansai region now apparently at a higher level than the Kanto region, people should not be encouraged to cross prefectural borders,” Nakata said. “In particular, there would be a huge risk with the Go To Travel (tourism-promotion) campaign.”