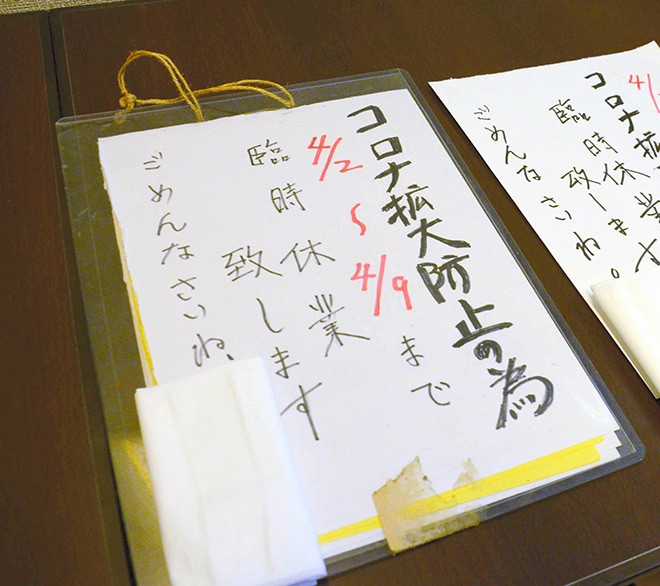 This restaurant in Nagano city posts a sign saying it would be closed between April 2 and 9. (Daisuke Shimizu)

Small regional cities across Japan are confronting a rebound in daily COVID-19 cases just like Tokyo, Osaka and other major urban centers where a state of emergency was recently in effect.

The cities in question also must grapple with their limited capacity to provide hospital beds for patients as well as treatment.

As a result, some municipalities have issued emergency measures of their own to stem a further rise in novel coronavirus infections.

A number of bars and restaurants in the entertainment district of Nagano city, northwest of Tokyo, began posting signs around noon on April 2 to say their establishments would be closing temporarily.

Nagano city authorities had asked the 1,300 establishments that serve alcohol to either shorten their business hours or close temporarily.

Nagano Governor Shuichi Abe noted during a March 31 news conference that infections were spreading in bars and restaurants. The decision to request those businesses to cooperate by shortening their operating hours or closing temporarily was a difficult one, he said.

During the one-week period until March 30, there were 118 new COVID-19 cases in Nagano city, a roughly 1.6-fold increase over the previous week, prefectural government officials said.

Similar trends are unfolding in other regions.

In Ehime Prefecture on the island of Shikoku, the number of COVID-19 patients in hospitals or resting at home or other types of accommodation totaled 342 as of April 2.

Alarmingly, the figure was very close to the 345 benchmark the government panel of experts had set to designate a region as being in the most serious stage 4 where new cases are increasing in an “explosive manner.”

Ehime Governor Tokihiro Nakamura said his prefecture was now experiencing a “fourth wave” in new infections. On April 1, he asked about 1,700 businesses in the prefecture to reduce their  business hours.

The prefectural capital of Matsuyama reported that bars and restaurants were involved in infection clusters of a variant strain of the coronavirus. Infection spread mainly among those in their 20s and 30s, and by April 1 a total of 197 people had been identified as having been infected in those clusters.

Nakamura said the variant strain was spreading very quickly and that infections had spread to other age groups in municipalities outside of Matsuyama.

In Takamatsu, the capital of Shikoku's Kagawa Prefecture, 10 members and staff of a pro basketball team were confirmed to be infected.

The team played a game in March in Saga Prefecture in Kyushu against a team where an infection cluster had occurred.

College students who moved from Osaka and Ehime to Takamatsu in line with the start of the new school year from April 1 were also confirmed infected.

Kagawa Governor Keizo Hamada indicated he would ask bars and restaurants to shorten their business hours in the week ahead.

“We are seeing the effects of an increase in infections in the urban centers,” Hamada said at an April 2 news conference. “Even if we make efforts (within the prefecture) to prevent a further spread, it will be difficult to shut off those effects unless there is a ban in travel across prefectural borders.”

(This article was written by Takashi Takizawa, Kuniaki Ito and Urara Yukawa.)