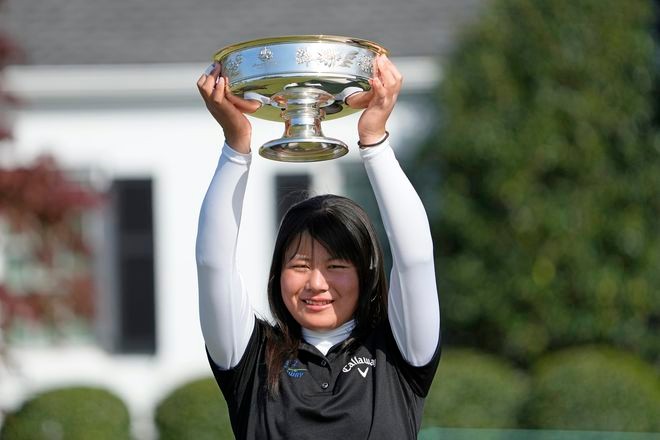 AUGUSTA, Ga--The one image of Augusta National that stuck with Japanese teenager Tsubasa Kajitani was Tiger Woods winning the Masters two years ago. She celebrated a big victory of her own Saturday, minus the green jacket.

And just like the 2019 Masters she remembers so well, the Augusta National Women's Amateur had its share of chaos.

The back nine was filled with more blunders than birdies.

Kajitani was not immune. She lost the lead--and appeared to lose out on the tournament--with a double bogey by taking four shots from the front of the 17th green. But she answered with a superb pitch to save par at the end for an even-par 72, and she beat Emilia Migliaccio with a par in the playoff on the 18th to win.

The 17-year-old was in tears and said only through an interpreter, “I can't describe it.”

It was nothing like the first edition of the Augusta National Women's Amateur, already among the most elite amateur events in women's golf because of where it's played. Jennifer Kupcho won in 2019 with an eagle and three birdies over the final six holes, a charge so familiar at the home of the Masters.

On greens that were far faster--an idea of what to expect at the Masters next week, perhaps?--this was all about backpedaling. Nine players had at least a share of the lead at some point in the final round.

Only two were left--Kajitani and Migliaccio, who closed with a 70--and they finished well before the last groups. They were at 1-over 217, and six players finished one shot behind. Three of them made bogey on the final hole.

In the playoff on the 18th, Migliaccio hit her approach so far right it was on the other side of the bunker. Facing a delicate pitch to a fast green, she came up short and into the sand.

“Oh, no,” she said, putting her hand over her face.

Kajitani had beautiful pace on a putt from the back of the green to 4 feet away, and she calmly holed it for the winning par.

“It's hard to lose to a par,” Migliaccio said. “I felt good over the club. It just didn't work out. I did everything I could, even though it wasn't what I wanted.”

This edition was more about collapses than charges, though it was no less compelling because Augusta National has more than decades of both. When Woods won in 2019, three players around the lead hit into the water on the 12th hole.

U.S. Women's Amateur champion Rose Zhang, the top-ranked woman in amateur golf, was the only player under par when she hooked her tee shot into Rae's Creek on the par-5 13th. She found golf balls in the water, none of them hers, so she had to treat it as a lost ball and return to the tee.

Then, she hit her approach--her fourth shot--short and into a tributary of the creek. She pitched on, took two putts and walked off with a triple-bogey 8.

“It didn't turn out well in the end,” Zhang said. “I definitely do think that there was some wrong course management.”

Moments earlier, Karen Fredgaard of Denmark was leading at 2 under when she came up well short of the 14th and took bogey, and then her second shot into the par-5 15th rolled back into the water. She pitched on and gassed her par putt some 15 feet by the hole, missed the next one and made double bogey.

“Now I can say I did Augusta with that putt,” Fredgaard said, surprised by the speed of it.

She found the bunker off the 18th tee and closed with a bogey for a 73.

Olivia Mehaffey of Northern Ireland tied for the lead late on the front nine only to make two straight bogeys around the turn and put her 9-iron into the middle of Rae's Creek for a double bogey on No. 12. She had her own memories of Woods, not from winning in 2019 but from his 10 on No. 12 last November.

“I think seeing what Tiger did last year was a little bit scary, and the hole is very intimidating,” she said. Mehaffey still thought she had a chance. But she failed to birdie the par 5s and closed with a bogey for 75 to finish two back.

Ingrid Lindblad, who began the final round tied with Zhang for the lead, didn't make a birdie until the 13th hole. The Swede followed that with a poor chip on the 14th that led to bogey, a three-putt on the 15th for par and a three-putt for bogey on the 16th hole. Another birdie on the 17th left her one shot out of the playoff, but she missed the green on the final hole. She also closed with a 75.

She was in the six-way tie for third along with Rachel Heck (72), Emma Spitz (71) and Karen Fredgaard (73), all of whom made bogey on the 18th hole that ultimately cost them a chance in the playoff. Pauline Roussin-Bouchard of France also finished one shot behind after a wild round of seven birdies and five bogeys.