Memorial held to mark death of Prince Shotoku 1,400 years ago 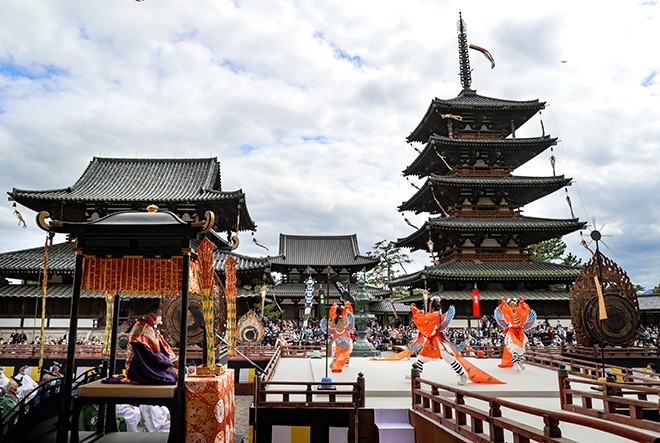 Traditional court music and dancing are performed in the west precinct of Horyuji temple in Ikaruga, Nara Prefecture, on April 3 during a memorial service to mark the 1,400th anniversary of Prince Shotoku's death. (Takaharu Yagi)

IKARUGA, Nara Prefecture--A memorial service to mark the 1,400th anniversary of the death of Prince Shotoku, a reformer in his time who steered the nation toward Buddhism, kicked off at Horyuji temple here on April 3.

The 450 or so guests invited to attend the three-day service all wore face masks as a precaution against infection from the novel coronavirus.

This year's ceremony was on a scale held only once every 100 years.

Horyuji temple, a registered UNESCO World Heritage site, was built in the seventh century at the behest of the prince (574-622).

Precisely 30 minutes after midday, head priest Shokaku Furuya led a procession from the temple’s eastern precinct with 120 others who carried a mikoshi portable shrine to the Lecture Hall.

A statue of how the prince looked when he was 7 years old was placed on the shrine along with supposed bone fragments of Buddha that fell from the prince’s palm when he was 2.

Standing in front of the Lecture Hall, Furuya described the prince’s accomplishments and prayed for world peace and an end to the COVID-19 pandemic.

Seventeen people, including monks at temples associated with the prince, began chanting sutras. There was also traditional court music accompanied by dancing by performers specializing in the art.

“We want to convey the spirit of cherishing harmony in society that the prince treasured, particularly now because we find ourselves in a time beset by a pandemic and strife,” Furuya said in an interview.

The prince is known for promulgating the Seventeen Article Constitution, which begins with a call to value “wa” (harmony).