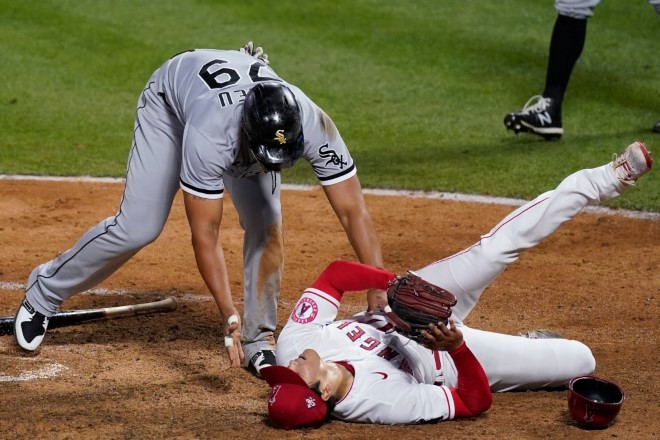 ANAHEIM, Calif.--Shohei Ohtani hit a 451-foot homer and pitched two-hit ball into the fifth inning in a historic two-way performance, and Jared Walsh hit a walkoff homer in the Los Angeles Angels’ 7-4 victory over the Chicago White Sox on Sunday night.

Walsh hit two homers, including a big three-run shot off Matt Foster to end the Angels’ third win over Chicago in their four-game, season-opening series.

Ohtani reached another milestone in his unique career when he took the mound and occupied the No. 2 slot in the batting order for the Angels. He was just the third pitcher in 45 seasons to hit for himself in a game with the designated hitter available, and the first to bat second since Jack Dunleavy did it for the Cardinals in 1903.

In the first inning alone, Ohtani both threw the hardest pitch by any starting pitcher in baseball this season and produced the hardest hit by any batter this season. Ohtani touched 101 mph with a fastball, and his first-pitch homer off Chicago’s Dylan Cease left his bat at 115 mph.

Even Ohtani’s 109.7-mph lineout to center in the second inning was hit harder than any other ball in the game except his own homer.

Ohtani also didn’t allow a run through the first four innings, but his control problems abetted Chicago’s three-run rally in the fifth. Ohtani left after a passed ball and a throwing error by catcher Max Stassi led to a scary collision at home plate between Ohtani and AL MVP José Abreu, but the Angels said the two-way star avoided injury.

David Fletcher and Justin Upton drove in early runs for the Angels, but Chicago tied it in the fifth with three combined runs on a wild pitch and Stassi’s passed ball.

Walsh reclaimed the lead for Los Angeles in the fifth with his first homer of the season, but new Angels closer Raisel Iglesias (1-0) couldn’t quite come up with a five-out save.

Chicago tied it in the ninth when Nick Madrigal scored from second on a throwing error by Iglesias, who tried to get him at third after fielding Adam Eaton’s one-out grounder.

The White Sox scored four runs despite going 0 for 11 with runners in scoring position.

Dexter Fowler, who entered the game via a rare AL double switch, singled off José Ruiz (0-1) to lead off the ninth. Anthony Rendon drew a one-out walk from Foster before Walsh secured his first career multi-homer game.

Angels manager Joe Maddon navigated the hole left in his lineup by Ohtani’s departure by using Albert Pujols as a pinch-hitter and later utilizing his NL managerial skills with the double switch.

White Sox: SS Tim Anderson grounded out leading off the first inning, and he didn’t take the field for the bottom half due to left hamstring tightness.

Ohtani even mastered Yermín Mercedes, the 28-year-old White Sox rookie who improbably got his first eight major league hits consecutively over the past two games. Ohtani struck out Mercedes in the second and fourth innings, dropping the designated hitter’s average all the way down to .727.

Mercedes beat out an infield single later for his ninth hit in three games.

White Sox: Carlos Rodon takes the mound in Seattle on Monday when they open a three-game series with the Mariners.

Angels: José Quintana makes his Halos debut Monday when they open a two-game series with the Houston Astros.