Ministry: 80% of COVID-19 deaths in Japan came after November 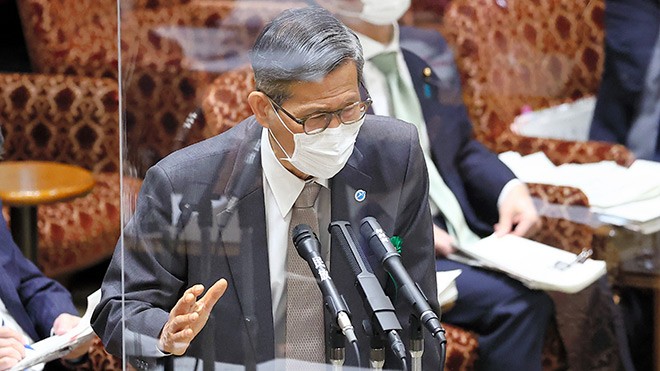 Shigeru Omi, who heads the government's panel to respond to the pandemic, at a session of the Upper House Budget Committee on March 25 (Kotaro Ebara)

Eighty percent of all COVID-19 deaths in Japan occurred in the third wave of infections starting in November, government data showed, and health experts warn a potentially deadlier fourth wave is near.

By the end of March, the country’s fatalities from the novel coronavirus totaled 9,173, excluding deaths of people who were confirmed infected on the Diamond Princess cruise ship and at quarantine at airports and ports, according to health ministry data.

The steep surge in deaths was caused largely by cluster infections at places with people more at risk of developing severe symptoms. Such outbreaks jumped fivefold at nursing homes and tripled at hospitals during the months since November compared with the numbers through the second wave of infections to October, the data showed.

In large cities, more than half of the COVID-19 patients who died contracted the virus through cluster infections at those facilities, according to the data.

In what has become a familiar refrain, Shigeru Omi, who heads a government expert panel responding to the pandemic, said Japan is at a “critical point” in stemming a rebound of infections.

Some experts fear that Japan is now entering a fourth wave of infections involving more contagious and deadly variants. Such strains are sweeping across Osaka, Hyogo and nearby prefectures, threatening to proliferate all over the country.

The worrying trend comes at a time when residents in the Tokyo metropolitan area and other urban centers have become more complacent about following safety protocols after two and a half months of restricted mobility and reduced outings under a state of emergency.

In addition, Japan is woefully lagging behind other Group of 20 advanced and emerging economies in terms of vaccinating its population, according to one estimate.

Japan started its vaccine program with health care workers in February and plans to begin inoculating elderly people this month. But the supplies of vaccines are limited, and nobody knows when the government can complete the vaccination of all eligible people.

Data from the Ministry of Health, Labor and Welfare showed that patients aged 60 or older accounted for 96 percent of the deaths in the third wave. People 80 or older were particularly hard hit, representing 67 percent of those deaths.

The ministry data showed that by the end of March, there were 1,176 cases in which two or more people tested positive for the virus at the same nursing care facility. The comparable number for hospitals was 992.

There were 1,064 cases of such infections at restaurants by the end of March, twice the number of the accumulated total through October.

In Tokyo, about 1,100 deaths were reported between January and March. Nearly 60 percent occurred at nursing care facilities and hospitals and about 10 percent at home.

Health officials are investigating the locations of the remaining 30 percent.

A similar trend was seen in Osaka Prefecture. Fifty-four percent of the deaths that occurred at nursing and medical facilities between Oct. 10 and March 25 resulted from cluster infections there.

A key reason behind the soaring number of the new cases in the third wave is the government’s failure to carry out widespread diagnostic testing of people who are most vulnerable.

In August, the government said it will “take full precautions against the virus to protect the elderly and people with underlying conditions.”

But widespread tests aimed at detecting infections at an early stage were not conducted at those facilities.

Authorities also dragged their feet in taking measures to slow community spreads, a step needed to prevent the virus from reaching nursing homes and hospitals.

The government’s expert panel called for decisive anti-virus measures on Nov. 20, including a review of the government’s program to bolster the hard-hit tourism industry by offering discount travel coupons.

But the government’s response was more focused on asking bars and restaurants to operate for shorter hours.

Tokyo allowed its eating and drinking establishments to remain open for longer hours than those in Osaka Prefecture.

With new cases continuing to climb, the travel discount program was suspended nationwide only on Dec. 28. The number of deaths shot up during yearend and New Year holidays.

Overloaded with COVID-19 cases, many medical facilities could not accept new patients for hospital treatment.

Based on the lessons learned from the third wave, the government plans to ramp up COVID-19 testing and enhance the capacity of hospitals to prepare for the fourth wave of infections.

But it will not be easy to contain the disease because people will likely contract the virus through various transmission routes, given the extent of the community spread, and the COVID-19 variants are fast replacing the initial coronavirus strain.

“A more chaotic situation will be likely in the fourth wave if the variants make up a majority of new infections,” said Mitsuyoshi Urashima, professor of molecular epidemiology at the Jikei University School of Medicine. “Inoculating the population is the only way to bring the pandemic under control.”

(This article was written by Kenta Noguchi, Hiroshi Ishizuka and Akiyoshi Abe.)