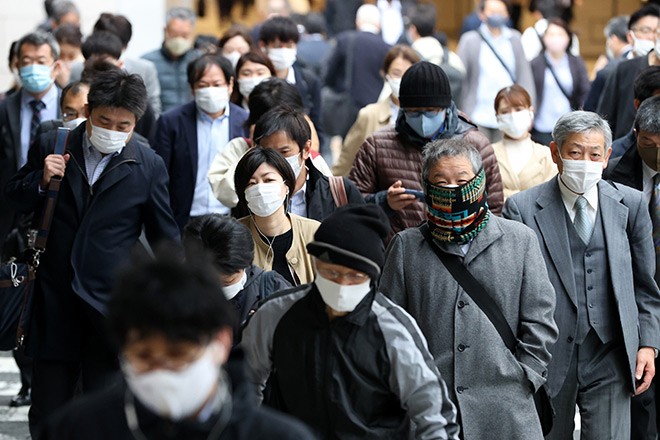 Authorities are implementing pre-emergency measures in six cities in Osaka, Hyogo and Miyagi prefectures to stop the novel coronavirus from resurging.

The central government issued stronger preventive measures for the three prefectures, which began on April 5, to allow the governors to request or order businesses to shorten their hours, even without a state of emergency in effect, and punish those disobeying.

They will ask restaurants, bars and other establishments close by 8 p.m. for 31 days, until May 5, when the Golden Week holidays end, in six cities: Osaka, Sendai in Miyagi Prefecture and Kobe, Nishinomiya, Amagasaki and Ashiya in Hyogo Prefecture.

But they will also hand out cash to businesses that cooperate.

Restaurants and bars complying with the requests can get anywhere from 40,000 yen to 200,000 yen per day based on the size of their business and their sales.

Osaka Prefecture is asking these businesses to take stricter measures on ensuring diners wear face masks and to install acrylic boards to separate customers to prevent the virus from spreading.

The prefectural government will check some 60,000 eating and drinking establishments in Osaka to determine whether they are complying with the requests.

Hyogo Prefecture will also check about 16,000 businesses in its four cities to inspect whether they are implementing virus countermeasures.

Miyagi Prefecture will ask eating and drinking establishments in Sendai to close shop by 8 p.m. and urge their customers to wear face masks during meals.

The prefectural government will implement its own measures in Sendai and elsewhere on top of the new measures.

In Sendai, movie theaters, gyms and other facilities will be asked to close by 8 p.m. and restrict how many people are allowed inside.

The prefectural government will ask restaurants and bars that provide companionship services or alcohol to close by 9 p.m. in all parts of Miyagi Prefecture.

When the measures officially came into effect on the morning of April 5 in Osaka, little seemed to have changed from the week before.
Commuters wearing face masks crowded into JR Osaka Station.

“The commuter train was packed with many people as usual,” said a 44-year-old woman who works at a company and is a resident of Ibaraki in Osaka Prefecture. “Everybody is wearing masks and staying silent, but I feel some anxiety.”

During the state of emergency, she worked from home, but she needs to return to the office now, while the pre-emergency measures are in place.

“Honestly, I want to work remotely, but I cannot help going to the office,” she said.

At the biggest entertainment and shopping district in the Tohoku region, in Sendai’s Aoba Ward, many local “izakaya” pubs and the beef tongue barbeque restaurants that the city is famous for posted notices on their entrances that said “temporarily closed” or “shortened business hours.”

Kotomi Numakura, an 18-year-old company employee from Tomiya, Miyagi Prefecture, was at JR Sendai Station heading off to a new workplace for training sessions.

“I think (the pre-emergency measures) were placed so late. If it had been done a little earlier, the infections would not have spread in such a wide and fast manner,” Numakura said. “The government should make stricter rules rather than repeating the requests for cutting business hours.”