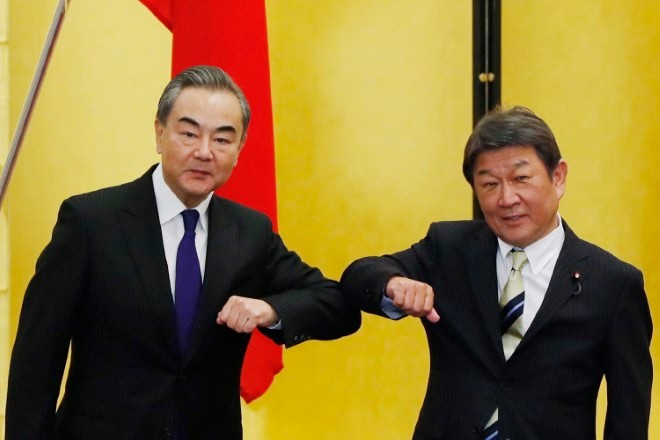 In this Nov. 24, 2020, file photo, Chinese Foreign Minister Wang Yi, left, and his Japanese counterpart Toshimitsu Motegi bump elbows as they meet amid the coronavirus outbreak, in Tokyo. (AP Photo)

BEIJING--China’s foreign minister has cautioned Japan against teaming up with the U.S. to counter China, ahead of a U.S.-Japan summit next week.

It quoted Wang as saying that “China hopes that Japan, as an independent country, will look at China’s development in an objective and rational way, instead of being misled by some countries holding biased view against China.”

Japan, a close U.S. ally that hosts major American naval and air force bases, shares U.S. concerns about China's military buildup and claims to territory in the South and East China Seas. However its major trade and investment interests in China have at times reined in its criticism of its larger neighbor.

Japanese Prime Minister Yoshihide Suga travels to Washington to meet President Joe Biden on April 16 in what will be the U.S. leader’s first in-person summit since taking office in January.

Biden, in contrast to his predecessor Donald Trump, has stressed rebuilding ties with European and Asian allies as the U.S. prepares for competition with a rising China.

Taiwan is another potential flashpoint, with Suga saying earlier this week that Japan would cooperate with the U.S. on the issue. China regards the self-governing island as a runaway province that should be under Chinese rule.

China, in a signal to the U.S. and its allies. recently sent an aircraft carrier group to waters near Taiwan for training exercises.