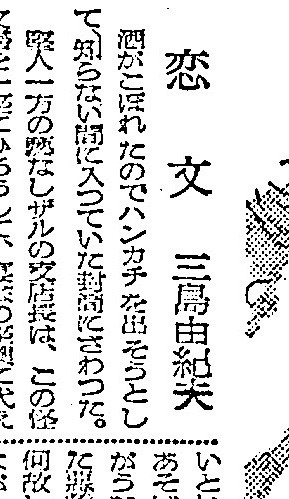 A long-forgotten short work penned by Yukio Mishima (1925-1970) when he was a budding novelist in his 20s will soon see the light of day again after more than 70 years.

The internationally acclaimed author wrote the short novel, titled "Koibumi” (Love letter), in 1949 for a newspaper.

Its existence had not been known by literary experts and has not been included in compilations of Mishima's works.

The monthly literary magazine Shincho will carry the recently rediscovered work in its edition that goes on sale on April 7.

Mishima was one of Japan's greatest novelists and regarded as a leading contender for the Nobel Prize in Literature.

The novel opens with a man who is attending a dinner party discovering a letter in his pocket when he reaches for his handkerchief. He had no clue how or when the letter ended up there.

“I will wait for you tomorrow at 5 p.m. in front of the PX,” the letter said without disclosing the identity of the sender. But it indicates that it was written by a woman.

PX, or post exchange, refers to retail stores on U.S. military installations that opened in Japan after it was brought under the occupation of Allied forces following its defeat in World War II.

The short work revolving around the mysterious letter reveals Mishima’s great literary skill even in his early years, according to Masao Saito, professor of modern Japanese literature at Osaka University, who discovered the long-lost novel in February.

“The piece describes circumstances of a Japanese family in the postwar years, an allusion of Japan’s situation under the occupation,” Saito said.

The work was carried in The Asahi Shimbun’s Osaka edition and Seibu edition that covers the Kyushu region on Oct. 30, 1949, as part of a feature titled “400-character novels.”

Mishima was 24 when the story was published. He had continued to release his novels even after he joined what is now the Finance Ministry after graduating from the University of Tokyo in 1947.

But he left the ministry in September 1948 to become a full-time writer. In the following July, he published the novel “Confessions of a Mask,” which made him an instant sensation in the Japanese literary world.