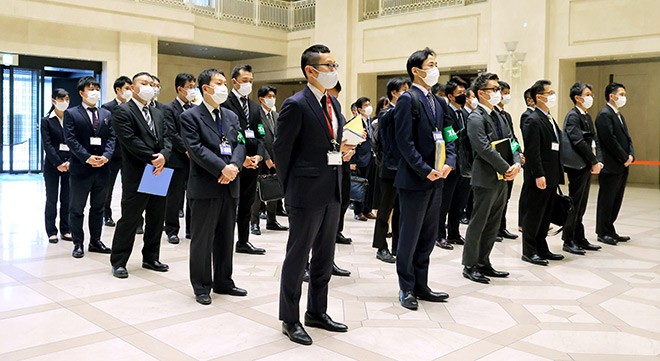 Officials of the Osaka prefectural and Osaka city governments gather before going on patrol around restaurants and bars on April 5. (Jin Nishioka)

OSAKA—Government officials started night patrols here to ensure bars and restaurants were engaged in “mask dining,” an anti-virus protocol that has caused confusion over enforcement and the consequences for failing to follow the rules.

The Osaka prefectural government has made mask dining mandatory for restaurants and bars under the central government’s pre-emergency measures issued for Osaka city to halt the resurgent spread of the novel coronavirus.

The prefectural government requires diners to unstrap one side of a mask or pull down the mask to around their chin while eating and drinking. They are required to pull up the mask when talking among each other.

The governor can fine businesses that fail to ensure their customers are taking such measures.

But questions remain over when such penalties would apply. And some businesses are at a loss on how to ensure their customers pull up their masks when they are not eating or drinking.

Tetsuya Ido, 49, who runs an “izakaya” pub called Matsuya in Osaka’s busy Kita area, is doing his part to follow the rules.

On April 5, he posted a note outside the front of the eatery that says, “Thank you for your cooperation with mask dining.”

“We will comply with administrative requirements and instructions as much as we can to stay open,” Ido said.

That includes “giving warnings to customers who speak in loud voices and telling them to wear masks,” he said.

Teruhisa Yamaguchi, 64, who frequents Matsuya, said mask dining may have an opposite effect.

“Putting on and taking off a mask could make the mask dirty,” said Yamaguchi, who wore a mask.

A manager of an “oden” restaurant in Osaka’s Minami district said he faces a dilemma.

He said several groups of customers dined at the restaurant at night, and none of them wore a mask while engaged in conversation.

“It is quite hard to ask customers to follow the mask dining rule,” he said.

The 40 officials on patrol, from both the prefectural and city governments, are working in pairs to enforce the new protocol. They aim to visit about 40,000 eateries in the city by May 5 to check if they have sufficiently implemented anti-virus measures.

One pair of city officials inspected 10 eateries inside a building in front of JR Osaka Station in the city’s Kita Ward. With a list of anti-virus measures in their hands, the pair checked if each business had taken proper measures to lower the risk of infection.

A 35-year-old female employee at a Korean restaurant in the building said she was surprised by the unexpected inspection.

“Only a few customers do mask dining,” she said. “But I will encourage them to do it.”

Osaka Mayor Ichiro Matsui said at a send-off ceremony for the officials that the purpose of the patrols is “not to bust an eatery” that does not comply with the administrative request. Rather, the patrols are intended to “increase the number of businesses that cooperate.”

Osaka Governor Hirofumi Yoshimura has said the mask dining requirement is an effective way to create “restaurants and bars that are resistant to infectious diseases.”

Based on the revised special measures law to deal with the COVID-19 pandemic, the prefectural government has requested eateries to turn away maskless customers and to urge diners to wear masks when they are not eating and drinking.

A prefectural government can order defiant businesses to comply with the request and charge an administrative fine against those that violate the order.

But a prefectural official acknowledged that it is “difficult to clearly define a situation that would lead to an order or a fine.”

Yoshimura himself said, “It is difficult to check if (diners) are mask dining so (the government) will not issue an order.”

Tsutomu Tsuzuki, a professor emeritus at Shinshu University who specializes in politicians’ language, said, “What Governor Yoshimura means by ‘mandatory’ is closer to the meaning of ‘manners,’ and it is a reflection of a profound sense of crisis.

“However, a person with power should be careful about using an expression that may restrict citizens’ actions. That is the basis of democracy,” he said.