Photos show in prewar Okinawa, women earned for their families 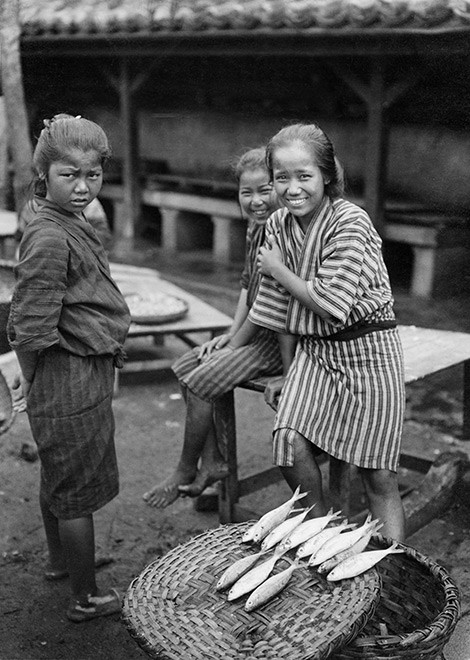 In this photo from around 1925, young women in Itoman sell fish, caught by their fathers or husbands, from a cargo container they carried on their head. Striped kimono was daywear for ordinary people. (Asahi Shimbun file photo)

Okinawan women had to toil just as hard as their husbands to sustain their families, for at least as far back as when their island was an independent kingdom, pictures taken in prewar years show.

In addition to fulfilling domestic responsibilities, they needed to pour their blood, sweat and tears into helping their families earn a living.

Working to bolster the family’s livelihood was not a new concept. In Naha, the prefectural capital of Okinawa and the commercial center since the days of the kingdom, a saying goes that “a wife is not considered a full-fledged adult unless she can feed her husband,” according to Harumi Miyagi, a researcher of the history of Okinawan women.

A photo taken around 1925 documents the vital role that women played in providing for their families. It shows young women in Itoman, a southern city, peddling fish caught by their fathers or husbands.

The picture was carried in the June 11 Osaka edition of The Asahi Shimbun the same year, describing the women as “fine merchants in their own right.”

It is one of 165 rare prints capturing Okinawans in prewar years that turned up recently at the Osaka headquarters of The Asahi Shimbun.

Another photo shot around 1925 shows a woman with tattoos on her hands and wrists, a local tradition known as “hajichi,” which was prohibited in 1899.

The custom of getting inked began as a rite of passage, marking milestones such as reaching adulthood and getting married, as well as for protection from evil spirits.

After the ban, people with tattoos became the target of a crackdown by authorities.

Still, many women continued to have a longing for tattoos, according to Miyagi.

“The custom had been an integral part of their spiritual culture,” she said.

In a picture shot around 1944, the year before the island was devastated by the Battle of Okinawa, young women are shown glazing earthenware at a workshop in Naha’s Tsuboya district, home to many pottery workshops.

Although women were not allowed to work around a kiln using fire, they learned how to paint and sell pottery in an effort to contribute to their households.

“Okinawan women were expected to support their families,” Miyagi said. “Even though they were trying to adjust to a Japanese way of life, the legacy from the time of the Ryukyu Kingdom was still with them when they went about their daily lives.”