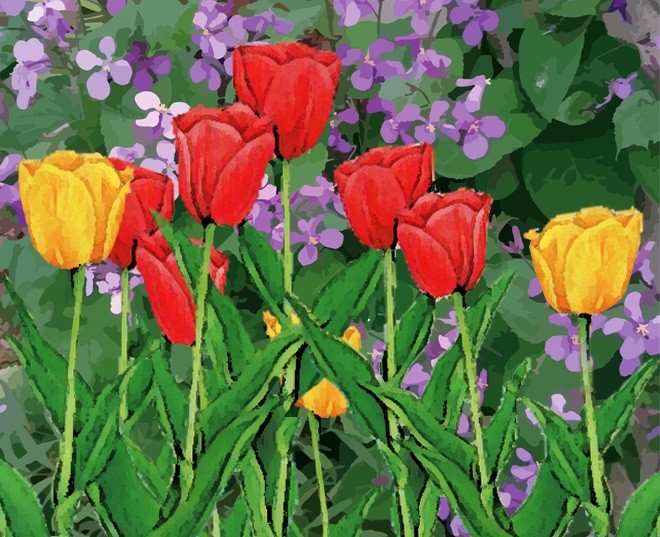 tulip bulbs
working out how old
you would be
--Alan Peat (Biddulph, England)

columbines
the breath i take
from your lips
--Isabella Kramer (Nienhagen, Germany)

after blooming...
she removes the flower stems
around the fence
--Goran Gatalica (Zagreb, Croatia)

The haikuist observed a gardener’s hands. Kiyoshi Fukuzawa knelt down at a cemetery in Tokyo. Since he moved to Osaka, Hidehito Yasui’s dear mother had a handful of garden chores to do.

On the gravestone
an old woman’s hand
picking spring grass

The warming climate coaxed the arrival of a cherry blossom on March 26 in Kyoto. That is the earliest ever recorded since 1409. The date of the first Japanese cherry blossom to appear at Jisho Shrine, Kiyomizu Temple, in Kyoto has been tracked for 732 times since the year 812. This long and complete seasonal record serves as proxy evidence that phenologists use to study seasons and that haikuists can use to compare traditional and modern haiku. Subir Ningthouja awaited news of the cherry tree that is faithfully measured at Yasukuni Shrine in Tokyo.

Satoru Kanematsu received complimentary bus tickets in Nagoya. Enjoying her garden in Tokyo, Junko Saeki was nonplussed by the soaring number of private companies selling Starship tickets to the international space station or around the moon. Tsanka Shishkova was enticed by the new way to travel.

quiet rain
on my lily buds
another ship to space

Mirela Brailean couldn’t sleep last night. At winter’s end we feel changes in sleep patterns, appetite, energy and the desire to be social. Sushama Kapur and Fukuzawa, respectively, seemed to agree with researchers who claim that people who regularly walk in the forest have lower stress and sleep better.

traces
under the plum in bloom
white night

basking...
under the evergreens
our morning walks

Vincenzo Adamo was rewarded during an early morning hike on the island of Sicily, which protects a nature reserve in Trapani with a splendid view of Mount Erice. Sagano enjoyed a refreshing laugh.

Schoolgirls talk
their heads in the clouds
laughing mountains

Helga Stania composed this one line on a Swiss mountain: while spring swooshes green hush of moss.

Giuliana Ravaglia composed these two lines that mirror the Apennines on a lake in the Emilia Romagna near Bologna, Italy.

april breeze--
scent of the mountains on clear water

Stania composed three more lines when she watched the river wear down the mountain. John Zheng walked along Stones river in Murfreesboro, Tennessee. Amita Paul dreamed of traveling the high mountain pass from the Punjab to Ladakh. Vandana Parashar reflected in Kargil, a town nestled in the Himalayas where borderlines divide India and Pakistan on opposite sides of the same mountain.

spring songs
listen to the friction
of pebbles

lonely walk
steps in sync with
a robin’s chirps

on the other side
of the mountain
people just like us

Mihovila Ceperic-Biljan stayed home to write in Rijeka, Croatia. Ivan Gacina folded 1,000 paper cranes in Zadar. Counting to 10,000, Junko Saeki believes “you can do almost anything if you are willing to do it on all fours.”

echo of the mountain...
my senbazuru in collusion
with the wind

planting my garden on all fours
the sweet peppers called,
“the temple of ten-thousand wishes”

Alan Peat penned four lines. This debut to the column reflects his interest in writing online educational books and books about 20th-century art, noting, “It keeps me from mischief!”

Nani Mariani made a wish while watching children dance around a sacred fig tree with aerial roots in a village in Victoria, Australia. Minal Sarosh observed newlyweds who didn’t social distance in Ahmedabad, India. Marek Kozubek walked down a familiar path in Bangkok, Thailand.

newly married
the jasmine creepers cling
to each other

still the same way--
through a flowering meadow
our love

Randall Herman drove past a faulty neon no vacancy sign in Victoria, Texas.

spring snow
the flicker of
a motel’s NO

one way friend
asking for a lend--
never thinking again

Peaceful face
of the stone image
from deep snow

Ramona Linke was saddened to hear a plea for comfort from a loved one in Beesenstedt, Germany. Zdenka Mlinar sympathized with a neighbor’s sufferance of an earthquake in Zagreb, Croatia.

contact restrictions
sometimes she longs for
hot milk with honey

Having worked with elders for many years, Elizabeth Moura looks forward to her own retirement and living in a converted factory in the small town of East Taunton, Massachusetts.

Mona Iordan would love to welcome guests to her home in Bucharest, Romania. Tradition promises a kiss to anyone who passes underneath the green sprig with pale berries. Alwine Kose promised tea to visitors in Germany.

forever
suspended over my door--
mistletoe

butterfly
embossed in my dreams
colors of spring

Insomnia
song of nightingales
before dawn

Haiku blooms at http://www.asahi.com/ajw/special/haiku/. The next issue of the Asahi Haikuist Network appears April 30. Readers are invited to send haiku about fireflies, on a postcard to David McMurray at the International University of Kagoshima, Sakanoue 8-34-1, Kagoshima, 891-0197, Japan, or e-mail to <mcmurray@fka.att.ne.jp>.