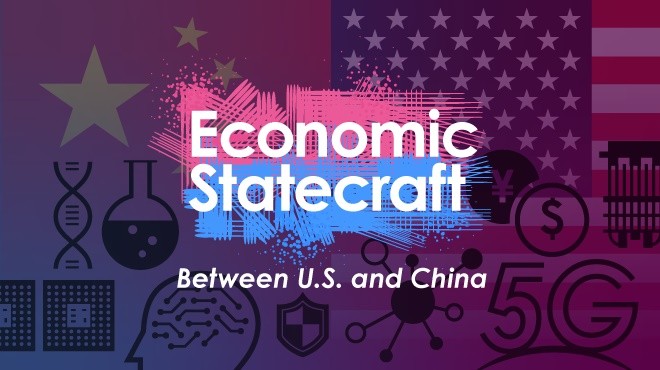 Japan is caught in the middle as the United States and China ratchet up their struggles to gain the upper hand not only in defense, but also economics.

The confrontation over economic security puts Japan in a bind because while it places maximum priority on the alliance with Washington for its national security, it also cannot ignore its close business ties with Beijing.

The effort the United States is making to keep Japan in its corner in the economic tussle with China was made clear to Japanese business leaders during an online meeting on the morning of March 16.

U.S. Secretary of State Antony Blinken, who arrived in Japan the previous evening, chose as his audience for his first meeting top business leaders, including Akio Mimura, chairman of the Japan Chamber of Commerce and Industry, and Hiroshi Mikitani, Rakuten Inc. chairman and CEO.

“Now is a really good time to work together to make sure that as technology and innovation move forward so quickly, consumers are protected, privacy is protected, and those who steal intellectual property are held accountable for it,” Blinken said.

Mimura was likely invited to the gathering because he heads an organization that counts about 1.24 million mainly small businesses as members. Many have close business ties with China.

Blinken added, “We need a systematic approach to building the industries of the future while protecting against unfair and illegal practices.”

With China clearly in mind, the message Blinken tried to pass on to the Japanese business leaders was the need for Japan and the United States to work together to rebuild industrial cooperation between the two nations.

A government source explained why Blinken sought a forum for discussions with Japanese business leaders.

“The aim was likely to drive a wedge into the business sector that has strong ties to China,” the source said.

Blinken was reiterating what U.S. President Joe Biden said in February before signing an executive order to protect the supply chain for U.S. industries.

Holding up a semiconductor chip, Biden said, “We shouldn’t have to rely on a foreign country--especially one that doesn’t share our interests or our values--in order to protect and provide our people during a national emergency.”

The current situation between the United States and China is very different from the Cold War when Washington and Moscow had very little to do with each other in terms of business.

Over the past few decades, the United States and China have deepened their economic dependency to become each other’s largest trading partner.

But those ties come with the risk of affecting national security when the relationship turns into confrontation rather than cooperation.

As a result, in sectors where the two nations are competing for dominance, the United States has begun decoupling China from its supply network.

The executive order that Biden signed on Feb. 24 included instructions to review the supply chain in four important areas, including semiconductors that are vital in business and military competition as well as rare earth metals needed to manufacture the most advanced weapons.

The executive order also urged cooperation with allies that have major companies as one way of rebuilding the supply chain.

One high-ranking Foreign Ministry official said about the pressure applied by the United States on China, “While it is an extension of the policy stance taken by the previous Trump administration, the current administration is making far greater efforts to involve allies.”

The Trump administration disturbed Japanese companies when it began restricting exports of semiconductor products in September 2020 to Huawei, the Chinese communications giant.

After facing a partial suspension of shipments of its products to China last year, Mitsubishi Electric Corp. immediately set up a unit directly answering to the company president that would be in overall charge of economic security.

The company also has a major presence in space and defense-related industries and the Chinese market accounts for 12 percent of its sales in comparison to the 9 percent that the United States contributes.

Ten company employees work in its Tokyo headquarters to analyze laws related to export regulations of the United States and China in order to calculate the various risks associated with such laws.

Satoshi Kusakabe, an executive officer at Mitsubishi Electric in charge of economic security who oversees the team, said, “In the long term, there will be a need to seek out ways to remain in business while reviewing our supply chain and in light of technological advances.”

Akira Amari, who heads an organ within the ruling Liberal Democratic Party tasked with coming up with a strategy for creating a new global order and submitted a proposal regarding unified economic security legislation, said, “We have to admit that the Japanese government and companies have a weak sense of crisis. If we err in our response, not only companies but the nation as a whole might end up being cut off from the supply chains by both the United States and China.”

Washington and Beijing engaged in verbal sparring on March 18 during the first meeting Blinken had with the top Chinese officials in charge of foreign affairs.

Meeting in Alaska, Blinken told his Chinese counterpart, Yang Jiechi, “We’ll also discuss our deep concerns with actions by China, including in Xinjiang, Hong Kong, Taiwan, cyberattacks on the United States, and economic coercion toward our allies.”

Blinken visited Japan and South Korea before flying to Alaska for the meeting with Yang.

Yang shot right back and reminded Blinken that Japan and South Korea are “China’s second and third largest trading partners.”

The diplomats from the two powers were trying to show that their side had the stronger economic ties with Japan.

The Biden administration has involved allies such as Japan in its attempt to counter China’s economic moves. While that is a vast difference from the previous Trump administration, it was that administration that clearly set up a confrontational stance toward China.

That was characterized by a tariff war as well as a strengthening of export restrictions on such products as semiconductors where China had made major inroads into the technological superiority once enjoyed by the United States.

But those moves are continuing under the initiative of the U.S. Congress where a bipartisan consensus exists regarding the economic threat posed by Beijing.

In January, Congress passed the National Defense Authorization Act for fiscal 2021, which included a provision to set up a multilateral fund to encourage joint development with allies of advanced technology for semiconductors and telecommunications.

U.S. congressmen have made it clear that allies that join the fund had to implement export restrictions against China on the same level as those of the United States.

Meanwhile, China has also taken retaliatory steps. In December 2020, it enacted an export control law that would restrict exports of strategic materials and technology related to its national security.

With the objective of protecting national security and interests, the law calls for bans on exports of technology and products as well as to specific companies included in a list of areas covered.

In December, China also announced it was placing restrictions on technology and products related to commercial cryptography, such as quantum cryptography. In January, it also came out with tougher production controls of rare earth metals.

That would be a major move since China accounts for about 60 percent of the world’s production of such metals. The metals are essential for manufacturing the most advanced weapons, such as the F-35 fighter jet, and companies in both Japan and the United States increasingly concerned about the possible effects.

Because China has not clearly spelled out which areas would be covered by the various restrictions, some government officials are worried that Japanese companies could be arbitrarily targeted by Beijing just because they compiled with U.S. laws.