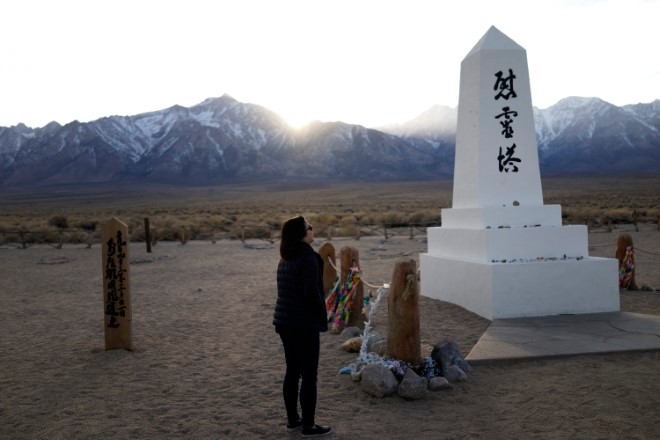 LOS ANGELES--The auction of a series of sketches purportedly drawn by an artist at the Japanese internment camp at Manzanar was canceled Tuesday after groups protested it was offensive and immoral to profit off the misery of incarcerated people.

The auction was halted by eBay hours before it was to conclude after company executives met with Japanese American groups who called the sale “hurtful, and a degrading reminder of the mass roundup and incarceration.”

“It’s seems unethical and immoral to put this artwork up on eBay to the highest bidder,” said Shirley Higuchi, author of “Setsuko’s Secret: Heart Mountain and the Legacy of the Japanese American Incarceration.” “When you sell artwork created during an oppressive time for money... that’s against what our society feels is moral.”

“Sales of our history are never a good thing but are especially hurtful now, when we hear cries to ‘go back to your country,’ exactly what we were told during World War II,” they wrote.

Japanese American groups also got a New Jersey auction house to halt the sale of a much larger collection of internment art in 2015. In that case, hundreds of pieces were turned over to museums that commemorate the forced internment of more than 110,000 people of Japanese descent for more than three years on the dubious claim they might betray America in the war.

The artwork for sale on eBay were 20 pencil sketches from 1942-1943 with the name Matsumura written at the bottom, along with the word Manzanar. The drawings depict mostly what appear to be Japanese landscapes, including one of Mount Fuji.

The groups suggested the artist could be Giichi Matsumura, the subject of a series of stories first reported by The Associated Press about a Manzanar prisoner who died in a storm while sketching and painting in the high Sierra in the final days of the war. Several Matsumura families were held at the camp 290 kilometers north of Los Angeles.

Lori Matsumura, the granddaughter of Giichi who recently reburied her grandfather’s remains after a hiker unearthed his skeleton in 2019, thought the sketches could be by her late father, Masaru, or another family member. The name printed in block letters was similar to the way her father signed high school reports.

Arts and crafts created in the 10 Japanese internment camps have often resurfaced later at yard sales or auctions. Some people abandoned their works when they left camp because they could carry little and had nowhere to go, while others stored it in attics or garages to be discovered later, said Bernadette Johnson, superintendent at the Manzanar National Historic Site.

If the artwork was by one of her relatives, it could have been in a trunk of her grandmother’s mementos that her aunt kept, Lori Matsumura said. The collection, however, was lost to the family after the aunt died in 2019, and the house was the subject of a legal dispute with her aunt’s partner that was settled for an undisclosed sum.

Lori Matsumura had discovered the auction Monday, day six of the weeklong bidding, and entered an $82 bid to try to win the works. The price had climbed to over $470 when the sale was yanked by eBay.

After the groups contacted eBay, the company removed the auction because it violated an artifacts policy prohibiting the sale of items from government or protected land, spokeswoman Parmita Choudhury said in an email.

Matsumura had a mixed reaction to the sale being halted.

“I feel I may never see those sketches again,” she said. “It depends how the seller reacts.”

Higuchi said eBay would contact the seller and put one of the groups in touch to try to obtain the collection.

The seller, listed as sunsetderby in Sharon Springs, New York, said the works came from the Japanese family of a former girlfriend in the 1980s. The seller would not name the girlfriend in a follow-up message and said the full name of the artist was unknown.

“It’s absolutely preposterous to think that I am doing anything wrong,” the person wrote in response to a question sent through eBay.

Erin Thompson, a professor of art crime at John Jay College of Criminal Justice, said anyone who legally owns a work of art is entitled to sell it. But she said consideration should be given to the circumstances of a work’s creation and the artist’s intent. When the creator can’t be consulted, a community consensus could be sought.

She said the first question should be about the authenticity of the work, which can be “questionable at best” on eBay. Any investor not swayed over the provenance might consider the moral issues brewing, Thompson said.

“People don’t want to buy a controversy along with a landscape drawing,” Thompson said. “It seems they’re worth the paper they’re created on and not much more.”

Bif Brigman, a former art dealer, said he had purchased similar Manzanar works from the same seller over a year ago by an artist named Matsui. He hopes to reunite them with the artist’s family or provide them to a museum, but he said he wouldn’t participate in future auctions of the kind.

“I didn’t want them scattered to the wind,” he said. “The whole notion that somehow eBay thinks that objects made by prisoners in a concentration camp is a commodity to be sold... is super offensive.”