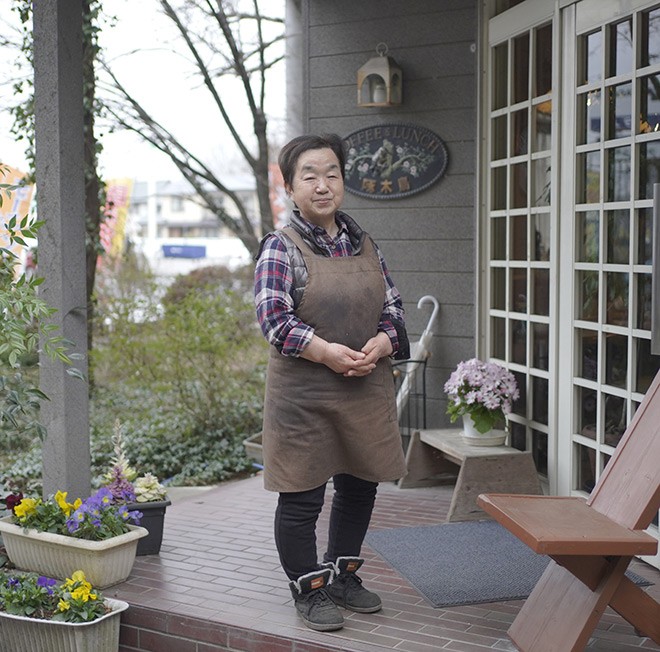 TSUKUBA, Ibaraki Prefecture--At 7:20 a.m. each Wednesday, cafe owner Kimiko Tanaka drives to the Higashi-Nihon Immigration Center in the neighboring city of Ushiku, a trip she has made almost every week for 25 years.

She travels to the center, managed by the Immigration Services Agency, to visit detainees who have lost their residency status for various reasons.

Many of them develop mental or physical problems after several years of incarceration. Some have committed suicide or waged hunger strikes in protest.

Tanaka, 68, leads a civic group that supports foreign detainees that was established after the Ushiku immigration center opened in 1993.

In her weekly visits that started in 1995, she has casual conversations with detainees through an acrylic partition to provide a distraction from their predicament.

With visitations limited to 30 minutes, Tanaka speaks basically in Japanese and listens to what the detainees want to say. She takes notes on how they came to Japan and ended up in detention, supplies they need and their health conditions to prepare for her next meetings with them.

She sees up to about 10 detainees on a single day, and she now has more than 10 thick file folders worth of notes.

In a recent visit amid the novel coronavirus pandemic, she learned that detainees feared infection because several people share cells.

Based on their opinions, Tanaka makes inquiries to immigration officials and asks them to improve the treatment of detainees.

“Those who could return home have already returned,” Tanaka said. “People who are taken to Ushiku are the ones who have no choice but to stay. They include those who have applied for refugee status, those who have lived in Japan for many years and have a foundation for their lives only in Japan, and those who have families in Japan.”

In some cases, people who fled from their countries and applied for refugee status at airports were handcuffed or tied with a rope around the waist for detention.

Tanaka emphasized that some people are being unnecessarily detained.

“It’s a big misunderstanding to think that all detainees are criminals,” she said.

In June 2019, a Nigerian detainee died during a hunger strike to protest his incarceration at an immigration center in Nagasaki Prefecture. In response to the incident and issues surrounding the long detention periods, the government started considering measures to prevent a recurrence and to deal with the problems.

The Diet has started deliberating a bill to amend the Immigration Control and Refugee Recognition Law submitted in February.

However, the bill does not include an upper limit on detention periods nor the establishment of a judicial review system to examine the necessity of detainments.

Last year, a United Nations working group said the long detentions and the lack of a judicial review system violate the International Covenants on Human Rights and called on Japan to correct the situation.

The proposed revisions would also make it possible to deport those who have applied for refugee status. Lawyers and the detainees’ supporters, including Tanaka, have voiced objections.

Detainees and their lawyers place deep trust in Tanaka. Her civic group was given the Human Rights Award from the Tokyo Bar Association in 2010.

“Most people (who come to Japan) will return home after they work for certain periods and make money,” Tanaka said. “Everyone prefers their own language, food and homeland.”

She thinks it would be mutually beneficial to accept those who have no choice but to stay.

If they were issued proper visas, they could work and pay taxes. Instead, taxpayers’ money is being spent to hold them in detention facilities, where they become exhausted both mentally and physically.

“We Japanese would also be troubled if we had the same problem in foreign land,” she said. “You can see it coming if you use your imagination a little.”

She also said foreigners are indispensable to lifestyles and the economy in Japan.

“Everyone has something to do with foreigners. We have to treat them properly. I wish an increasing number of people would feel the same,” Tanaka added.