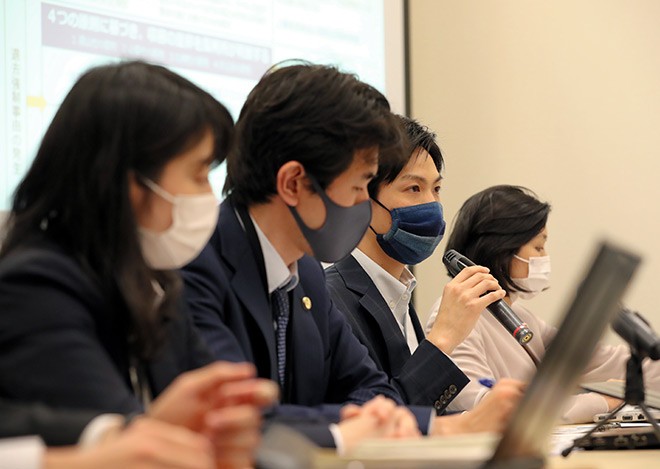 Lawyers and other participants at a news conference on April 6 speak about a statement issued by United Nations’ experts that says a bill to revise Japan’s immigration control law could violate international law. (Rei Kishitsu)

The group pointed out that a bill to revise the law could violate the International Covenant on Civil and Political Rights because it maintains the principle of detaining people suspected of being subject to deportation and lacks provisions on the maximum detention period and judicial review of decisions on detention.

It expressed “serious concern” over a provision that enables deportation of those who have applied for refugee status more than three times. It said the provision could violate the principle of non-refoulement, which bans deportation of individuals to a country where they could face persecution.

The group comprises the U.N. Working Group on Arbitrary Detention and special rapporteurs on the human rights of migrants, freedom of religion or belief, and torture and similar malicious treatment. It issued the request in a joint statement dated March 31.

Following the statement's release, Human Rights Now, a Tokyo-based international nongovernmental organization, and others held a news conference on April 6 to ask the government to explain its stance on the bill to the public.

The government submitted a bill to revise the immigration control law to the Diet in February to resolve the issue of long-term detention of foreign nationals designated for deportation at immigration facilities because they have illegally overstayed their visas and for other reasons.

Under the bill, new provisions on a “monitoring measure” and “complementary protection” would be added to the law, which currently has a provision on “provisional release.”

The monitoring measure would allow detained foreign nationals to live outside detention facilities under certain conditions. The complementary protection would be equivalent to protections provided to refugees.