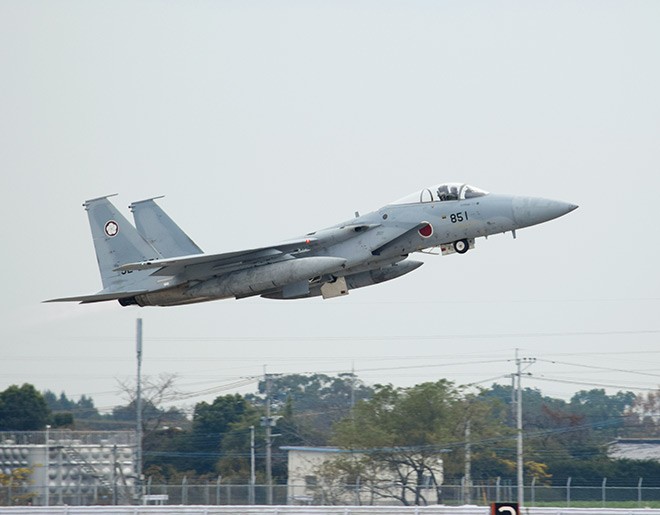 Skyrocketing costs have forced the Defense Ministry to drastically revise its strategy to protect outlying islands against moves by China.

Ministry officials had initially hoped to retrofit F-15 fighter jets so that they could fire long-range cruise missiles to defend the Nansei island chain that stretches southwest from Okinawa Prefecture.

But expenses in the initial preparatory stage of design and constructing the facilities for the retrofitting have continued to climb, and ministry officials still have no idea what the ultimate total cost of the project might end up being.

According to several ministry sources, Defense Minister Nobuo Kishi has given instructions for a thorough review of the plan.

During talks with visiting U.S. Defense Secretary Lloyd Austin on March 16, Kishi discussed the F-15 retrofitting plan and said Japan would not sign a related contract with the U.S. Air Force Department worth 39 billion yen ($355 million), according to government sources.

Kishi’s move was highly unusual because the Defense Ministry had received Diet approval for those funds in the fiscal 2020 budget.

The change in plans comes at a time when China continues with its maritime advances near the Nansei chain.

On April 3, six Chinese Navy ships, including an aircraft carrier, sailed in waters between the main Okinawa island and Miyakojima island.

Included in that fleet were destroyers larger than Japan’s Aegis destroyers as well as a destroyer carrying missiles with ranges of about 1,000 kilometers.

The retrofitting would have enabled the F-15 fighter jets to be armed with cruise missiles with a range of about 900 km.

One objective in the Mid-Term Defense Program for the five-year period from fiscal 2019 to fiscal 2023 was to provide the Air Self-Defense Force with 20 F-15s retrofitted to carry the cruise missiles by fiscal 2027.

U.S. officials, however, said even more funds would be needed from fiscal 2022 and beyond, leading Japanese government officials to point out they had no idea what the final price tag would be.

A major reason behind the soaring costs is that Japan is using the U.S. government’s Foreign Military Sales (FMS) program, which allows the Defense Ministry to buy ordnance directly from the United States.

Several ministry sources said Kishi ordered the thorough review of the plan because under the current arrangement “it would be difficult for Japan to use its budget or make new requests in future budgets.”

According to Defense Ministry sources, another factor behind the ballooning costs is that the retrofitting plan also includes a package of various measures, such as upgrading equipment so the F-15s would have a greater capability to engage in electronic warfare.

The sources said ministry officials were considering selecting a smaller number of alternatives from that package that could be covered by Japan’s limited budget.