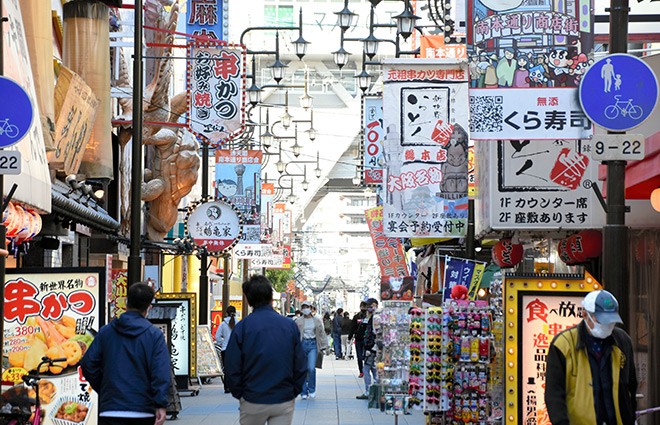 Few pedestrians are seen walking about in the Shin-Sekai entertainment district near Tsutenkaku Tower in Osaka on April 5. (Yuki Hanano)

The high numbers in recent days in Osaka have exceeded the figures for Tokyo and have raised concerns about the strain on medical facilities.

Osaka Prefecture marked a record 719 new COVID-19 cases on April 6, but that number was surpassed by 159 the next day.

Appearing on a TV program on April 7, Osaka Governor Hirofumi Yoshimura said there were 158 hospitalized patients with serious symptoms. The ratio of hospital beds the Osaka prefectural government has secured for COVID-19 patients and is now being used is 70.5 percent, Yoshimura added.

Osaka was one of the prefectures included in the state of emergency declared by the central government in January, but it was lifted on March 1 as well as for five other prefectures, including neighboring Kyoto and Hyogo.

The number of new COVID-19 cases has been on the rise since late March. The figure exceeded 600 for three consecutive days from April 1.

Prefectural government officials are saying that Osaka has entered a fourth wave of infections and believe the recent increase is due to drinking parties related to personnel transfers at companies and by students relaxing during their spring vacation breaks.

The more infectious variant strain of the coronavirus is also believed to be a factor behind the surge in new cases.