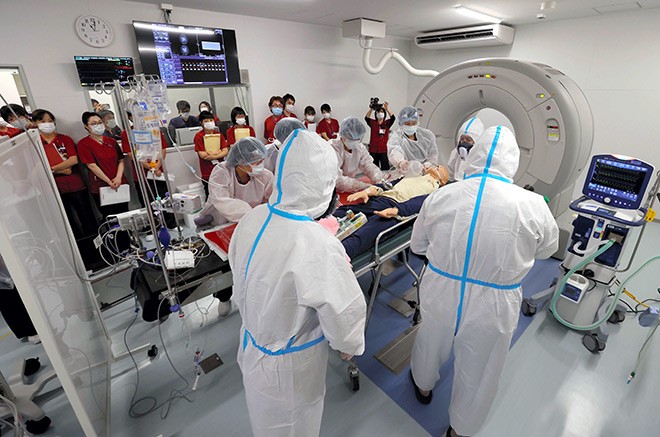 OSAKA--Worried Osaka prefectural officials issued a “red alert” on April 7, declaring the prefecture is under a state of medical emergency with new COVID-19 cases skyrocketing.

"The infections have continued to explode at a faster rate than before," Osaka Governor Hirofumi Yoshimura said at a meeting of the prefectural headquarters to deal with the novel coronavirus pandemic. "Our health care system is in a dire situation, and we need to issue a state of medical emergency."

It was the second time for the prefecture to issue a red alert, based on its own standards called the “Osaka model.” The last time the alert was issued was in December 2020.

But apparently, the new warning came too late to raise awareness as officials confirmed the daily count of new infections on April 7 at 878, the highest ever.

Yoshimura said the main reason for the rapid infection spread is the highly contagious U.K. coronavirus variant. The U.K. variant "spreads much faster and patients are more likely to develop severe symptoms much faster," he said.

One of the guidelines that the prefectural government has set to issue a red alert is the occupancy rate of hospital beds for patients with severe symptoms reaching 70 percent or more.

There were 149 patients currently hospitalized with severe symptoms. The occupancy rate of the 224 hospital beds that the prefectural government has secured was 66.5 percent.

Hospital beds have been filling at a pace far exceeding December 2020, which prompted the first red alert.

By issuing a state of medical emergency, the prefectural government will once again urge residents to refrain from going out or traveling for non-essential purposes. Restaurants and bars in the city of Osaka will be asked to follow the government’s request to close by 8 p.m.

In the meantime, the prefectural government will hurriedly secure more hospital beds and health care workers.

The prefectural government on April 5 asked hospitals of a certain size that have beds for patients with mild and moderate symptoms to continue to treat two or more patients even if their condition becomes more severe.

The request arose out of concern that hospital units with beds for patients with severe symptoms may be unable to take in new patients.