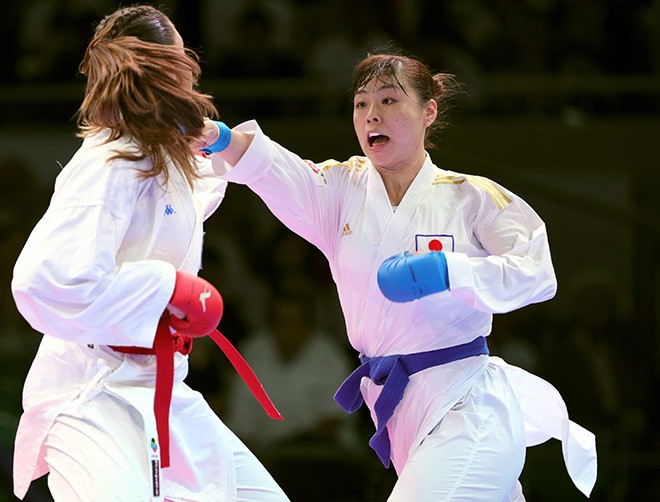 Ayumi Uekusa, right, wins the women’s 68-plus kilogram division at a karate competition in Tokyo in 2019. (Asahi Shimbun file photo)

The technical director at the Japan Karatedo Federation (JKF) stepped down on April 7 amid power harassment allegations against world champion Ayumi Uekusa.

Masao Kagawa also announced his resignation from the JKF board.

Uekusa, 28, has secured her berth on the Japanese national team for the Tokyo Olympics in the women’s 61-plus kilogram division.

The JKF held an ethics committee meeting at the end of March and acknowledged that Kagawa injured Uekusa’s eye with a bamboo sword during a training session in January.

The federation had previously said that bamboo swords are dangerous and should not be used in training.

The JKF was expected to hold an extraordinary board meeting on April 9 and decide on punitive measures against Kagawa.

Uekusa posted in her blog on March 28 that Kagawa had been hurting her self-esteem and yelling at her more often since last autumn.

According to Uekusa, Kagawa struck her face with a bamboo sword during training on Jan. 27, and she was later diagnosed with a contusion of her left eye. She was also not allowed to join the national team’s training camp in March.

Kagawa claimed that he did not intentionally injure her eye and that it was “part of training.”

However, he apologized on the morning of April 7.

"I have been teaching karate to athletes for many years, but it was all my fault,” Kagawa said.

He added, “I am truly sorry for her. I really hope that she and other karateka who will compete in the Tokyo Olympics will do their best in their matches.”