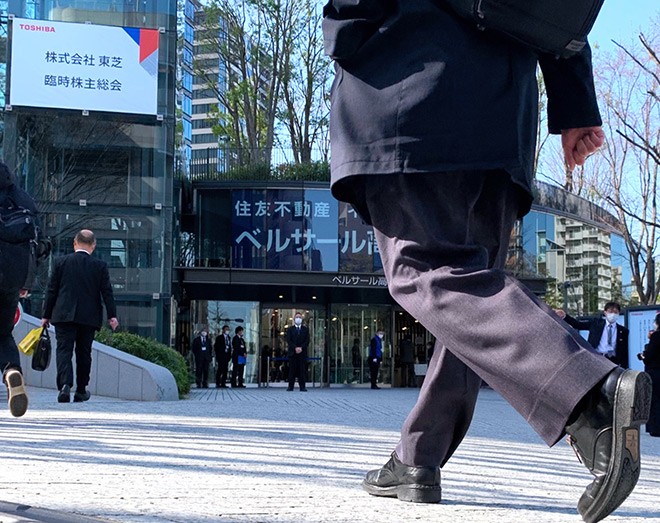 The offer, made April 6, is apparently aimed at settling Toshiba’s battle with activist shareholders and improving its management efficiency by taking the embattled conglomerate private, sources said.

Toshiba President Nobuaki Kurumatani acknowledged the proposal when asked by reporters on the morning of April 7.

“We have received it and will discuss it at a board meeting,” he said.

CVC’s buyout proposal comes in at a 30 percent premium on Toshiba shares over their current value, meaning the deal would amount to about 2.3 trillion yen if it goes through, according to the sources.

Toshiba’s management will wait until CVC presents more details about the deal and then carefully weigh them, including the method of acquiring its shares and the proposed premium, the sources said.

But twists and turns are expected until the buyout becomes a reality.

The deal would hinge on government approval, since Toshiba runs a nuclear power business.

Opposition from shareholders also cannot be ruled out, analysts said.

Top Toshiba executives have been at odds with Effissimo and other activist shareholders, saying they are standing in the way of management.

CVC is no stranger to Kurumatani, who served as chairman of the Japanese unit of CVC for about a year before he joined Toshiba to become its chairman in 2018. Prior to CVC, he was vice president of Sumitomo Mitsui Financial Group. He became president of Toshiba in April 2020.

Analysts called for greater transparency in the buyout negotiations. Yoshiaki Fujimori, an outside director at Toshiba, is a senior executive adviser of CVC’s Japanese unit.

Toshiba has been struggling to rebuild for years. In 2016, it announced that the company suffered huge losses relating to its U.S. nuclear unit, Westinghouse Electric Co. The year before, the company was rocked by scandal when a string of details surfaced about illicit accounting practices.

About 60 foreign investors came to Toshiba’s rescue in late 2017, when the company was desperate for funds. The move had the effect of increasing their influence on management.