Osaka to cancel Olympic torch relay throughout the prefecture 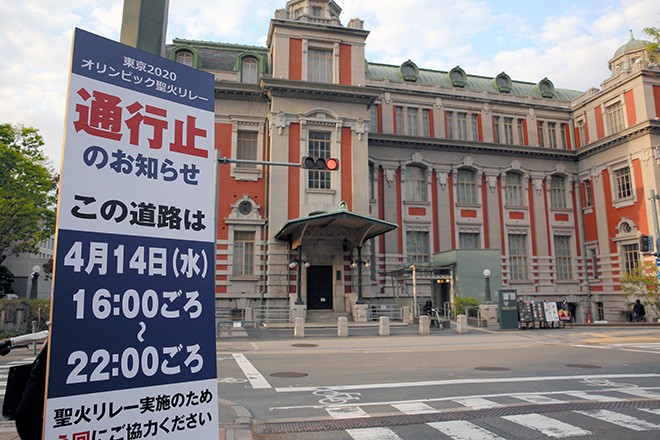 A signboard announces the schedule of the Olympic torch relay and planned street closures in Osaka’s Kita Ward on April 2. (Yoshiaki Arai)

OSAKA--Osaka Governor Hirofumi Yoshimura announced on April 7 that the upcoming Olympic torch relay will be canceled in the prefecture because of the spike in novel coronavirus infections.

Yoshimura made the announcement at a news conference after issuing a second "red alert" for the prefecture, which is now under a state of medical emergency.

“We have decided to cancel the Olympic torch relay in Osaka Prefecture,” he said.

The final decision will be made by the Tokyo Games’ organizer, he said.

Yoshimura said he is considering as an alternative letting torch bearers run in the closed Expo ’70 Commemorative Park in Suita in the prefecture.

The relay is scheduled to pass through 18 cities and towns in the prefecture on April 13 and 14.

As the central government issued pre-emergency measures in the prefecture, the prefectural committee for the relay, headed by Yoshimura, had already decided to cancel the relay portion that runs through the city of Osaka, where residents have been urged to stay home.

With infections still rapidly spreading, the prefectural government on April 7 issued the red alert. Officials decided to ask residents in the entire prefecture to refrain from going out for nonessential purposes.