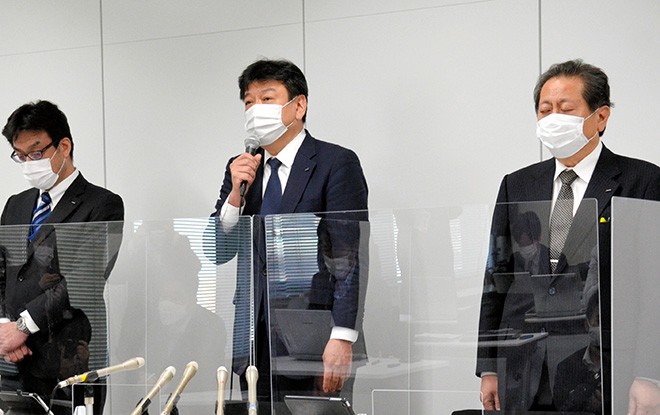 NIIGATA--The president of Tokyo Electric Power Co. on April 7 apologized for a string of misconduct at its nuclear power plant in Niigata Prefecture that revealed dangerous holes in the company's anti-terrorism security measures.

“I am deeply sorry about causing great anxiety and distrust among local residents and the public,” Tomoaki Kobayakawa said at a news conference here.

TEPCO failed to notice malfunctioning of equipment designed to detect unauthorized entry to controlled-access areas at the Kashiwazaki-Kariwa nuclear plant  and left the situation uncorrected at multiple sites for more than 30 days since March last year.

In addition, a TEPCO employee entered a central control room at the Kashiwazaki-Kariwa plant using a colleague's ID in September, in violation of the security protocol.

In response to the missteps, the Nuclear Regulation Authority ordered the utility not to load a reactor at the plant with nuclear material late last month, effectively blocking the company’s plan to restart the facility as soon as it can.

Kobayakawa said he will voluntarily take a 30-percent monthly salary reduction for six months, together with four other directors, to take responsibility for the fiasco at the plant.

He also said an investigation will be launched to look into why such incidents took place at the plant by inviting experts on security of nuclear materials and corporate governance.

TEPCO’s planned investigation is expected to examine whether its employees shared heightened awareness of the vital importance of safeguarding nuclear material and security of their nuclear plants.

It will also look into systemic problems of the utility concerning security.

TEPCO will submit its findings to the NRA by September.

“As for what the management should have done concerning security, we are determined to improve what needs to be improved based on the findings of the probe,” Kobayakawa said.