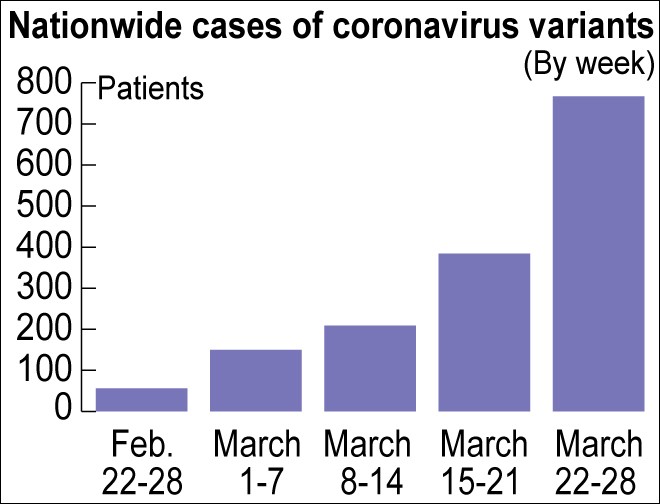 Mutant strains of the novel coronavirus are spreading so rapidly that experts are calling for immediate measures to discourage people in hotspot areas from going on unnecessary outings.

Between the end of February and the end of March, cases of coronavirus variants increased by about 14-fold across Japan, new data shows.

There were only 56 cases of variant infections reported in the last week of February, but the figure grew at a rapid clip until it reached 767 by the week of March 22 to 28.

While the problem is especially prominent now in prefectures in western Japan, experts warn the Tokyo area could see a major increase in variant cases over the next month.

The variant first discovered in Britain in December is believed to be the main one spreading like wildfire in Osaka and Hyogo. Evidence points to the strain not only being more infectious, but also posing a higher risk of patients developing serious symptoms and dying.

The corresponding figure was much lower for Tokyo, at just 3 percent. But experts warn if variant cases increase at the current rate, they could make up about 70 percent of new infections by May 1.

Authorities have implemented special precautionary measures to rein in the spread of infections in five cities in Hyogo and Osaka prefectures despite a state of emergency not being in effect.

But at an April 7 meeting of a panel of experts reporting to the health ministry, members pointed to the rapid surge in infections in municipalities outside of Osaka city, as well as in the neighboring prefectures of Kyoto, Nara and Wakayama, as cause for alarm.

Experts said authorities should be urging residents to refrain from making unnecessary outings and traveling outside their prefectures.

They expressed uncertainty and raised criticisms over the effectiveness of the pre-emergency measures put in place in Osaka and Hyogo, which have so far mainly focused on shortening the business hours of bars and restaurants.

One panel member said during the meeting that Osaka was too slow in implementing new measures.

“If I lived in Osaka, I would not leave my home,” another member said. “This is not a situation of allowing wining and dining while wearing face masks. I believe there should be a call for residents to stay home.”

Under current guidelines, people who become infected with the variant strain and are treated at hospitals can only leave after two negative polymerase chain reaction tests.

But some experts at the April 7 meeting called for doing away with that requirement to free up more hospital beds. They called for other standards to be used to allow patients to leave the hospital.

The variant is meanwhile infecting children under 10 at a higher proportion than the original virus, data shows.

As of April 6, 15 percent of those infected by the variant strain were in their 40s, while 10 percent were under 10. Children under 10 only made up about 3 percent of the cases of the original virus.

Experts still do not know why the variant strain is infecting more children.

(This article was compiled from reports by Jun Tabushi and Akiyoshi Abe.)