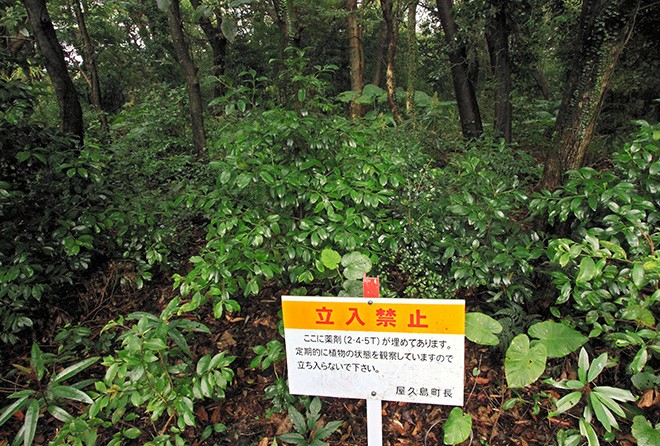 A no-entry sign stands in March at a site where toxic herbicide was buried in Yakushima, Kagoshima Prefecture. (Tsuyoshi Takeda)

YAKUSHIMA, Kagoshima Prefecture--Additional safety precautions are being called for to warn the public of nearly four tons of a toxic weedkiller long buried in Yakushima island, a World Natural Heritage site.

The herbicide containing extremely toxic dioxin was buried underground in a forest here half a century ago by the Forestry Agency.

Yakushima Mayor Koji Araki pledged to consider a response after a local assemblywoman pointed out the danger.

The weedkiller in Yakushima is part of a large cache buried across Japan, sparking calls for proper disposal.

According to the agency, the herbicide known as 2,4,5-T had been widely used in Japan to plant trees on state-owned forests under a central government program.

But its use was banned in 1971 after the weedkiller was found to be extremely toxic.

As of January, about 26 tons of the herbicide remain buried in 42 municipalities in 15 prefectures.

In a plot owned by the Yakushima town government in the north of the island, 3,825 kilograms of the herbicide are buried, the second most in the nation after 3,940 kg buried in Shizukuishi, Iwate Prefecture.

Local residents in Iwate and other prefectures are calling for the removal of the toxin from the current site for disposal or relocation, citing the danger of the herbicide becoming exposed or leaked in the event of torrential rain or an earthquake.

Asked about his town’s policy concerning the herbicide last month, Araki said stepped-up monitoring is the only way to keep the danger at bay.

“No scientific recourse is available to render harmless the herbicide that was buried and solidified with concrete,” he said at a town assembly session in response to a question from Maki Manabe, an assemblywoman.

Manabe urged the town to identify the exact location where the weedkiller was buried and fence off the site to warn the public, in addition to the sign and rope already in place.

She said some people are maintaining that a “no-entry” sign stands in a place where the hazardous material was not actually buried.

The mayor promised to consider the town's options after conducting an investigation into the herbicide with the Yakushima regional forest office, a local branch of the agency.