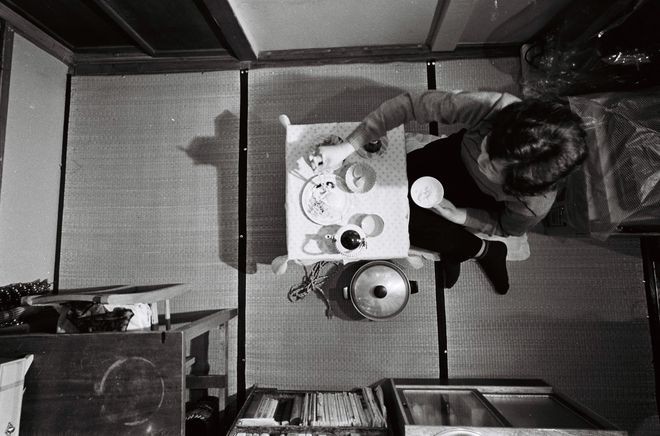 A university student living away from home eats a meal in 1961 in Tokyo’s Edogawa Ward. (Asahi Shimbun file photo)

Private university freshmen living alone in the Tokyo metropolitan area are being more frugal than ever, surviving on a record low 607 yen ($5.50) a day, according to a new survey.

The survey was conducted by the Tokyo Federation of Private University Faculty and Staff Unions, a group of unions for private university teachers in the Kanto-Koshinetsu region.

“Parents who began working part time to pay for their children’s college tuition have also lost their jobs,” said Kunihiko Shirai, a professor at Aoyama Gakuin University, who heads the federation. “University students are struggling to make ends meet.”

The federation sent questionnaires between May and July 2020 to parents of children who entered one of nine universities in Tokyo, as well as neighboring Kanagawa, Chiba and Saitama prefectures last April. It received 5,382 valid responses.

Many respondents said they are earning less due to the pandemic and their children who enrolled in college cannot find part-time jobs. Others said their incomes have plummeted from the impact of the nation’s first state of emergency, issued last spring.

Thirty-two percent of respondents were parents of freshmen living away from home, and two-thirds of them disclosed the amount they give their children to cover monthly living expenses.

The results showed the parents paid on average 82,400 yen a month for expenses since last June. From June onward, university students usually no longer need to buy new textbooks and other materials, as the academic year starts in April in Japan.

The survey found that first-year students living away from their parents had monthly living expenses of 18,200 yen when excluding their average monthly rent payment from the 82,400 yen total.