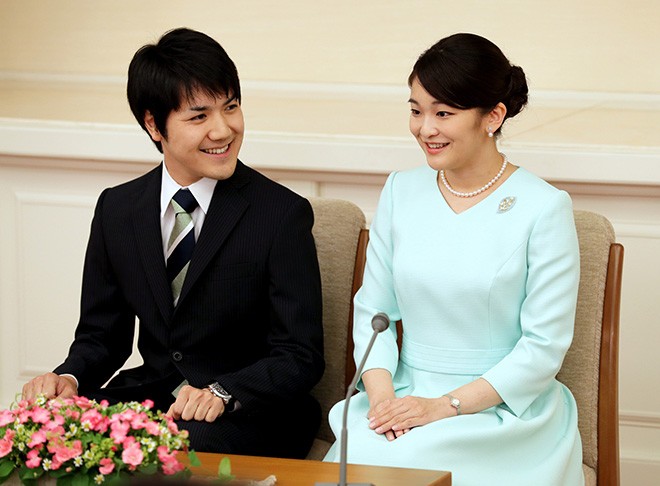 Princess Mako and Kei Komuro announce their plan to marry at a news conference in September 2017. (Pool)

Kei Komuro, Princess Mako’s college sweetheart, issued a statement on April 8 in response to media reports on financial issues between his mother, Kayo, and her former fiance to “correct as much wrong information as possible.”

Komuro also said “there is no change” in the couple's intention to tie the knot, in his statement, released through a lawyer.

The stories, reported in weekly magazines and other media, caused concern within the imperial family over whether marriage plans between Komuro and Mako should proceed, resulting in the delay.

Mako, the eldest daughter of Crown Prince Fumihito and Crown Princess Kiko, met Komuro while they were studying at International Christian University in Tokyo. The two announced their intention to wed in September 2017.

But in February 2018, the Imperial Household Agency said the marriage had been delayed after the financial issues involving Komuro's family came to light.

In the statement, Komuro disclosed detailed exchanges between his family and the former fiance over the issue. Komuro said he initially decided to remain silent about the matter because his family wanted to resolve it through discussions to protect the man’s privacy.

But Komuro said his family found it difficult to continue cordial discussions with the former fiance without denying or rebutting the man’s one-sided claims reported in weekly magazines and other media outlets.

Komuro said he decided to issue the statement after Fumihito told a news conference in November last year that the Komuro family needs to provide a “visible” response to the financial troubles to gain broader public support for the couple’s wedding intentions.

“I think he provided a very thorough explanation (in the statement),” Yasuhiko Nishimura, who heads the Imperial Household Agency, said at a news conference on April 8. “I was able to understand the facts and background behind their discussions.”