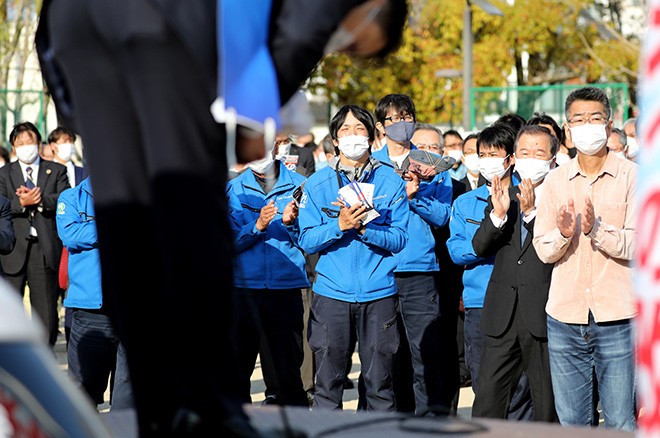 Voters cheer for a candidate giving a speech in Higashi-Hiroshima city on April 8 for the Upper House re-election in Hiroshima Prefecture. (Jun Ueda)

Two of the three elections were called after scandals embroiled LDP lawmakers. And the party has already given up vying for one of the seats up for grabs.

Moreover, these elections will gauge how the public feels about Suga’s abilities and how he and the LDP might fare in the next Lower House election.

April 25 will be voting day for all three elections.

The ruling party has set the bar low, hoping to gain at least one victory. Opposition parties have formed a united front in hopes of not only winning the Diet seats but also gaining some much-needed momentum.

Fumio Kishida, a former LDP policy chief and current chairman of the party’s Hiroshima prefectural chapter, emphasized the importance of the election.

Usually calm and quiet, Kishida clenched his fists and raised his voice on April 8 in preparing for the fight in Hiroshima.

“We must choose the right person this time as our representative,” he said.

The Hiroshima re-election emerged after Anri Kawai’s victory in the 2019 Upper House election was nullified. A former LDP member, Anri was convicted on vote-buying charges earlier this year.

The Hokkaido by-election was also called because of a scandal.

Takamori Yoshikawa, a former agriculture minister, was indicted on bribery charges and resigned from the LDP and the Lower House.

The LDP decided early on not to field a candidate to replace Yoshikawa.

“We will lose the election in Hokkaido without putting up a fight, and we are facing a very tough situation in the remaining two elections, too,” Taro Aso, the deputy prime minister and finance minister, said at a meeting of his party faction on April 8.

The Nagano by-election was called after Yuichiro Hata, an Upper House member of the opposition Constitutional Democratic Party of Japan, died of COVID-19.

Nagano Prefecture has been a stronghold of Tsutomu Hata, a former prime minister and father of Yuichiro. The LDP usually has a tough time in winning elections in this prefecture.

Many LDP members believe the election in Hiroshima Prefecture is the party’s best shot for victory.

The prefecture is the stronghold of the LDP Kochikai group, currently the Kishida faction. Former LDP Prime Minister Hayato Ikeda and other prominent politicians have been produced from the group.

But the vote-buying scandal may have done serious damage to the LDP, as well as to Suga.

Twenty-four members of the LDP prefectural chapter are believed to have received cash from either Anri or her husband, former Justice Minister Katsuyuki Kawai, to buy votes in the 2019 election.

Such local politicians are usually very influential in elections. But the cash recipients’ activities in the re-election have been restricted.

“This election is totally different from the ones we had before,” a Diet member from Hiroshima Prefecture said.

The 2019 election could have other repercussions for the LDP this month.

In that election, the LDP headquarters accepted the wishes of then Prime Minister Shinzo Abe and Suga, who was chief Cabinet secretary at that time, to promote Anri Kawai’s campaign.

The LDP’s Hiroshima prefectural chapter wanted to back the incumbent in the race.

The party’s headquarters provided 150 million yen ($1.37 million) for Kawai’s campaign, a much larger sum than what is normally given.

As a result, Kawai won her first seat in the Diet while the incumbent supported by the prefectural chapter lost.

“I don’t want anybody who came here to cheer for Kawai in the election to come back and support our new candidate,” Yoichi Miyazawa, a former economy minister who was chairman of Hiroshima prefectural chapter in the 2019 election, said at a meeting held at the LDP’s headquarters on March 17.

It was an apparent indirect message aimed at the prime minister.

Suga was one of those who traveled to Hiroshima Prefecture to campaign for Kawai.

In the Hiroshima re-election, the LDP candidate, Hidenori Nishita, 39, will compete for the seat against Haruko Miyaguchi, 45, who is endorsed by the CDP and other opposition parties.

Suga, who replaced an ailing Abe as prime minister last September, has struggled to raise his Cabinet’s approval ratings against a series of other scandals and criticism over the government’s handling of the COVID-19 pandemic.

A Lower House election must be held by autumn, so political circles are paying close attention to Suga’s leadership abilities in the elections this month.

If the LDP fails in the election in Hiroshima Prefecture, a place once considered a lock for the party, Suga could lose the loyalty of other LDP members.

“I think that no one will try to drag him down from his position, but his power might be weakened by such a failure, like getting hit by body blows,” a former Cabinet member said.

(This article was written by Natsuki Okamura and Takashi Narazaki.)