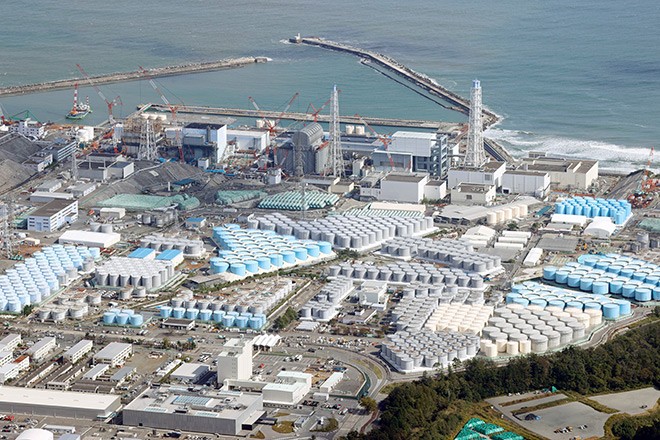 Tanks holding radiation-contaminated water fill much of the space on the grounds of the Fukushima No. 1 nuclear power plant. (Asahi Shimbun file photo)

The Suga administration is just days away from announcing its long-awaited decision on the disposal of treated radiation-contaminated water piling up at the crippled Fukushima No. 1 nuclear power plant complex.

And all the signs point to Prime Minister Yoshihide Suga overriding the vociferous objections of local fishermen and ordering the water to be discharged into the Pacific Ocean after it has been further processed to ensure radiation levels fall below legal standards.

A meeting of the relevant Cabinet ministers is set to be held as early as April 13 to set the policy in motion.

Local fishermen are fiercely opposed to the move, citing the negative publicity that is bound to arise from the dumping of contaminated water into the ocean and the impact it will have on their livelihoods.

Suga met April 7 with Hiroshi Kishi, president of JF Zengyoren, the national federation of fisheries cooperatives, to seek his understanding and cooperation. He made clear a decision was imminent.

A subcommittee of experts formed by the economy ministry compiled a proposal in February 2020 that said dumping the water into the ocean was the most realistic option.

Government officials over the past year have held numerous meetings with local governments and fishermen to hear their views.

The government last October was close to making its decision based on further efforts to consider steps to counter the anticipated negative publicity from dumping the water into the ocean.

But opposition from fishermen pushed back the timing of a decision.

As the government mulled what to do, contaminated water continued to pile up at the Fukushima plant. More than 1,000 storage tanks installed at the site now hold about 1.25 million tons of processed water.

The storage tanks are expected to reach capacity by autumn 2022, prompting the government to state that the situation could not be delayed much longer.

Even if the go-ahead on ocean disposal, considered a foregone conclusion in the eyes of many, is made, it will still take about two years before the water can begin to be safely dumped.

Local fishermen made clear they intend to continue with their opposition, making it unclear whether their fears will be incorporated into any measures the government takes to deal with negative publicity.