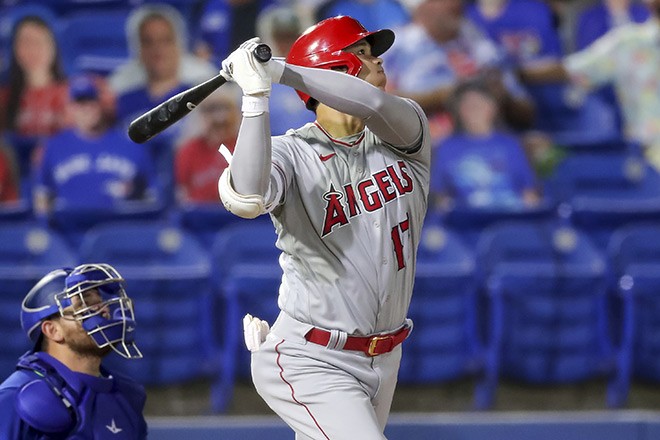 Shohei Ohtani is unable to pitch this weekend, but his bat has given the visiting Los Angeles Angels a chance to clinch their series against the Toronto Blue Jays on Saturday night at Dunedin, Fla.

Ohtani had a three-run double and a solo homer Friday as the Angels defeated the Blue Jays 7-1. They have won 12 of their past 15 games against the Blue Jays.

The Angels have won the first two games of the four-game series. They have matched a franchise best with their 6-2 start, having won six of their first eight games twice before.

It was the fourth loss in a row for the Blue Jays, who are in a hitting drought. "We've just got to relax a little bit and get good pitches," Blue Jays manager Charlie Montoyo said. "Right now, as a team, we're expanding the zone a lot and we're paying the price."

Ohtani, who is the designated hitter when he does not pitch, will miss a pitching start that was going to be either Saturday or Sunday because of a blister on his right middle finger. It also was an issue in an exhibition start against the Los Angeles Dodgers on March 29.

"(Ohtani's) fine," Angels manager Joe Maddon said. "He'll be back out there. We just want to make sure that it's well and it doesn't continue to pop up. There's nothing else to report, he's fine."

Ohtani said after his last start on Sunday that the blister wasn't a problem, He left that outing after landing awkwardly on a play at home plate against the Chicago White Sox. He left the game because of his pitch count.

He showed Friday that the blister does not affect his hitting.

Matz was impressive in his Blue Jays debut April 5 at Arlington, Texas, when he struck out nine and allowed one run in 6 1/3 innings. He has never faced the Angels.

The Angels lost outfielder Dexter Fowler (knee contusion) Friday after a play at second base in the second inning.

The Blue Jays had to make changes before the game on Friday. Outfielder Teoscar Hernandez was placed on the injured list because of exposure to a positive COVID-19 case with a close contact outside of the team.

Left-hander Ryan Borucki (side effects from a COVID-19 vaccine) went on the IL and outfielder Lourdes Gurriel Jr. (nausea after a COVID-19 vaccine) left the game after the second inning. Right-hander Tyler Chatwood (right-triceps inflammation) was put on the 10-day IL. Outfielder Josh Palacios and right-handers Joel Payamps, Ty Tice were recalled from the Blue Jays' alternate training site.

Palacios was 0-for-3 Friday in his major league debut, and Tice pitched two scoreless innings in his first big-league game.