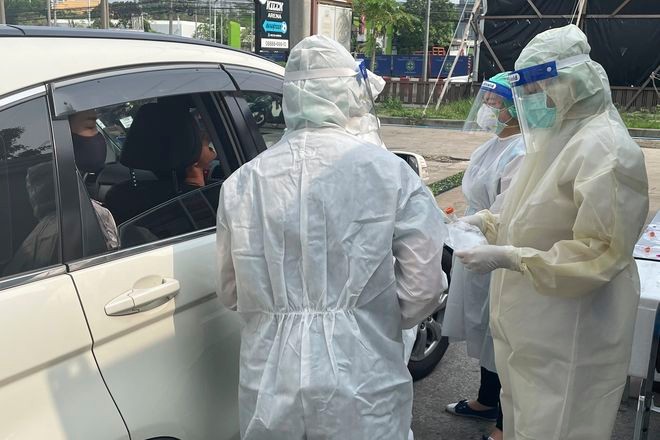 Medical workers conduct swab tests on passengers at a drive-thru COVID-19 testing facility outside a hospital in Nonthaburi, Thailand, on April 10. (AP Photo)

BANGKOK--Thailand plans to install 10,000 field-hospital beds in Bangkok, a health official said on Saturday, as the country strains to cope with a third wave of COVID-19 infections.

At least a dozen hospitals in the capital said they had stopped testing for the coronavirus as of Friday due to a lack of kits or capacity. Hospitals are reluctant to test because they must admit people if they test positive, authorities say.

"We aim to increase (field) hospital beds to 10,000 in no time, which should give the public confidence that we can still contain this round of outbreak," Suksan Kittisupakorn, director-general of Thailand's Medical Service Department, told reporters.

The current surge appeared to be the country's worst yet, he said.

Thailand reported 789 new cases and one death on Saturday, taking the total number of infections to 31,658, with 97 deaths.

So far this month, Thailand has reported 2,697 new domestic infections, including 1,058 cases in Bangkok, the epicentre of an outbreak that has seen cases climb from a few dozen to several hundred a day.

The outbreak, which includes the highly transmissible B.1.1.7 variant first identified in Britain, has rapidly spread to 62 of Thailand's 77 provinces, Opas Karnkawinpong of the Department of Disease Control told a briefing.

Thailand's third wave comes ahead of major national holidays next week and as the country seeks to reopen to foreign tourists.

Prime Minister Prayuth Chan-ocha asked people to limit the spread. "I'm very worried. If anyone does not need to travel, please stay home," he said in a podcast on Saturday.

Thailand is aiming to start mass immunisation from June. It has vaccinated more than 530,000 health workers and people deemed vulnerable.

Thailand, which received 1 million doses of vaccine from China's Sinovac vaccine on Saturday, is to get another 500,000 doses this month, said deputy government spokeswoman Traisuree Traisoranakul.