Hotels vie for guests with new long-stay offers for teleworkers 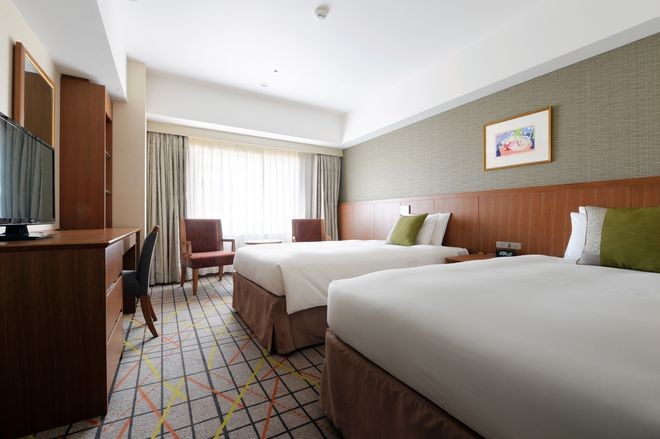 Struggling hotel operators are ramping up efforts to lure in guests looking for longer stays and seeking to use the rooms as temporary residences or telework offices.

Hotels are scrambling to generate as much profit as possible as the novel coronavirus crisis keeps its usual customer base away, which has prompted a string of innovative promotional packages amid the pandemic.

The trend toward introducing longer-stay options began to take off on Feb. 1, when Imperial Hotel Tokyo, located in the capital’s Uchisaiwaicho district, unveiled a new 30-night extended-stay package for 360,000 yen ($3,280).

The offer quickly attracted a lot of attention for providing the chance to enjoy one of Japan’s most prestigious hotels at a cheaper rate.

The hotel booked all 99 of the specially prepared rooms on the same day of the service’s release.

“It was a bigger response than we expected,” said an Imperial Hotel representative responsible for public relations.

Officials in the hotel industry remarked that they were astonished by the Imperial Hotel’s decision to take such an “excessive measure,” though far fewer tourists and people on business trips are staying at hotels as the pandemic stretches on.

JR-Central Hotels, which runs six facilities mainly in the Tokai region, as well as Hotel New Otani in Tokyo and Rihga Royal Hotel Osaka, have introduced special packages for long stayers as well.

Some businesses are winning over travelers looking to both work and vacation through new packages that leverage their nationwide hotel networks.

Tokyu Corp. started accepting bookings on April 9 for its Tsugi Tsugi package that lets guests stay at any of 39 facilities throughout the country, including Excel Hotel Tokyu, for lengthy periods.

Hotels offering the package are available from Sapporo on the northernmost main island of Hokkaido to Miyakojima island in the southernmost prefecture of Okinawa.

Tokyu expects the package to attract people booking stays for “workations,” a mix of working and vacationing, where they telework from central Tokyo on weekdays and then spend time on weekends at tourism destinations elsewhere. The operator will even cover part of guests’ travel costs between hotels, it said.

It can currently cater to a total of 100 guests under the special package, but according to Tokyu representatives, the company had already made 80 bookings as of April 9. If more than 100 people try to make reservations, guests will be chosen by lottery.

On April 9, Tokyu showed off the Shibuya Stream Excel Hotel Tokyu in the capital’s Shibuya Ward to reporters. A company employee in his 30s from Tokyo, who tested out the hotel, said he now rarely goes to his office since his work introduced a teleworking system.

“I was wondering why I have to live in a tiny home with high rent in the central part of the capital,” he said. “It is a dream package to me.”

Tokyu is looking to further improve the service’s content, such as by raising the number of accessible hotels and providing opportunities for guests to interact with each other.

“Many hotels have newly opened in preparation for the Tokyo Olympics,” said Kazumine Kawamoto, 32, the project leader who proposed the Tsugi Tsugi package. “Putting them into operation, even at lower rates, is better than leaving them unoccupied.”

The special offering is available on a trial basis ahead of the full introduction of the program. The next round of bookings will start “as soon as possible,” once it irons out all the wrinkles.

Mitsui Fudosan Co. launched a program where guests can use the company’s 35 lodging facilities nationwide, including Mitsui Garden Hotels, for 30 to 90 nights while taking trips.

The price ranges from 165,000 yen through 210,000 yen for a 30-night package, depending on the grade of hotel. Although the offering is open to 100 reservations, 800 or more people have reportedly applied for it.

Orix Group is marketing a package for guests to spend time at three hotels in Sapporo, Kyoto and Osaka for 30 nights for 135,000 yen.

A new service by Nippon Hotel Co., an affiliated company of East Japan Railway Co., lets customers stay at 32 hotels primarily in the Tokyo metropolitan area for up to 30 nights for 200,000 yen.

“There is a growing need for novel experiences in daily life as trips are restricted amid the coronavirus outbreak,” a Nippon Hotel representative said.

(This article was written by Sho Hatsumi and Akira Nemoto.)