Vaccine program for elderly starts with limited supply of doses 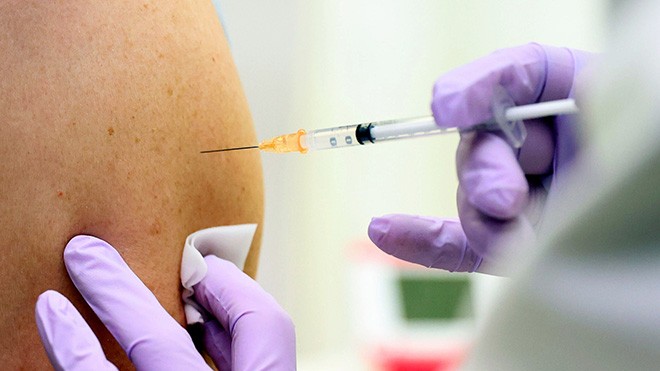 A resident receives a shot against the novel coronavirus in Kita-Aiki village in Nagano Prefecture on April 12. (Nobuo Fujiwara)

Vaccinations of people 65 or older against the novel coronavirus started in a limited number of municipalities in Japan on April 12 amid calls to the central government to increase the supply of doses.

Senior citizens, who accounts for 36 million people in Japan, are the second group to receive the shots, following health care workers, whose vaccinations started in February.

Although the central government plans to give each senior citizen the two required shots by the end of June, the rollout has been significantly stymied by the limited supplies of vaccines procured so far.

The start of vaccinations for seniors came after a resurgence of novel coronavirus infections prompted the government to issue pre-emergency measures in Tokyo, Kyoto and Okinawa prefectures. Those measures took effect also on April 12.

Municipalities in Osaka, Hyogo and Miyagi prefectures were already applying those measures to control the spread of infections.

In Hachioji, a city on the outskirts of Tokyo, all elderly residents who secured slots through appointments are expected to receive their first shots by April 23.

On the first day of the inoculations, 250 people were scheduled to received shots by around 5 p.m., as well as five residents at a nursing home in the city.

The Hachioji city government turned the first-floor lobby of the city hall building into a vaccination center.

The lobby is usually crowded with residents seeking to take care of some paperwork, so the venue was separated from other areas with 2-meter-high partitions to prevent a potential spread of the virus.

Eligible senior citizens entered vaccination booths after going through the registration process. They received the shots near their shoulders after answering questions from a doctor. They then moved to a waiting area where they rested for around 15 minutes.

Hachioji began accepting vaccination reservations online and through phone calls on April 5. But demand was so great that many residents were unable to gain access to the city’s website or get through over the phone.

Hachioji Mayor Takayuki Ishimori said the case should have driven home the point to the central government that many residents are keen to get immunized.

“As residents are eager to receive shots as quickly as possible, they inundated the city government with reservations,” he said.

Ishimori called on the central government to secure more supplies of vaccines.

In Kita-Aiki village in Nagano Prefecture, a 100-year-old man became the first in the prefecture to receive a dose when the inoculation program began at a clinic on April 12.

“It felt like an ordinary shot,” said the man who went to the vaccination site by car accompanied by his relatives. “I am thankful.”

About 40 percent of the village’s population of about 700 are 65 or older.