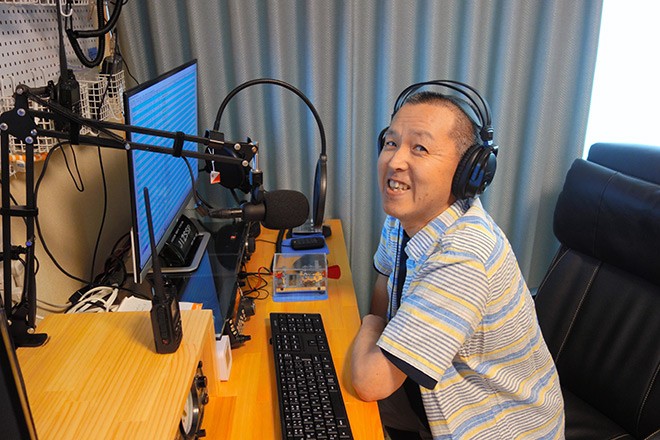 “This is JI2SSP. Anyone from Kumamoto, are you OK? I’ll be on standby all night. Let me know if you need anything.”

“This is JA6TJY. We’re short of water because no tap water is available here. We’re also running short of food.”

Mamoru Hiraoka, the voice behind call sign JI2SSP, was calling from Kawabe, Gifu Prefecture, some 650 kilometers away from Kumamoto.

“I felt reassured, thinking that someone was always out there to keep watch over us,” recalled Nishiyama, 67.

Across Japan, dozens of amateur radio operators were listening in on their conversations.

The exchange on that day led to post-quake relief efforts, friendship between the two men and a network of volunteer ham radio operators to support disaster-hit areas.

Nishiyama started checking in with Hiraoka daily at the fixed hour of 9 p.m. to update him on the situation in the quake-ravaged areas, a practice that lasted for a month.

Hiraoka, a disaster management expert certified by the Japan Bousaisi Organization, was on the lookout for ways to make use of ham radios to assist disaster victims.

Using radios and social media, Hiraoka called on fellow operators to buy water and food and send them to Kumamoto Prefecture. Dozens of them answered the call.

A ham radio operator in Fukuoka Prefecture, also in the Kyushu region, took it upon himself to receive drinks in plastic bottles and cups of instant ramen donated from around the country.

The man drove to deliver the goods to Nishiyama, and some ended up in the hands of other quake survivors.

The temblor on April 16 and another two days earlier together claimed 276 lives. The twin earthquakes both registered a maximum of 7 on the Japanese seismic intensity scale of 7.

Seven months after the quakes, Nishiyama met Hiraoka in person at an event in Hiroshima Prefecture that organized amateur radio operators.

Nishiyama asked, “Is it you, Mr. Hiraoka, JI2SSP?” after spotting the name tag that hung from his neck.

Tears welled up in his eyes. Hiraoka also looked misty-eyed.

The two men started to meet each other about once a year, sometimes over drinks.

Hiraoka would tell Nishiyama that he loves “chance encounters” with strangers through radios.

“You never know who’ll be calling out today,” he said. “You can never tell how far your radio signals will be traveling.”

Hiraoka was also confident that amateur radio operators have a role to play during a disaster.

“Ham radios could complement telecommunications infrastructure when it is rendered unusable,” he said. “In times of major disasters, amateur radios will undoubtedly turn out to be useful in certain situations.”

“SSP, do you hear me?” Nishiyama continued calling out in vain.

On Sept. 3, he was contacted by Hiraoka’s wife, Yuko, 47, who informed him that her husband had died from cancer. He was 53.

Hiraoka had asked that his illness be kept secret. Nishiyama found he missed Hiraoka as if they had been friends since their youth.

Still, Hiraoka’s passion for mobilizing amateur radios during a disaster lives on.

The Kumamoto earthquakes prompted volunteer ham radio operators to build a network to keep watch over developments in disaster-hit areas.

More than 50 members will be on standby at home or elsewhere when a disaster strikes outside the prefecture where they live. They turn their radios on and wait for possible SOS signals.

Nishiyama was appointed the person in charge of the Kyushu region.

On the evening of March 20, an earthquake hit Miyagi Prefecture, measuring a maximum intensity of upper 5.

Nishiyama stayed put at his post in front of his radio set for some time and even slept with a compact radio beside him.

Whenever a disaster strikes outside Kumamoto Prefecture, he thinks: “It’s my turn to provide help this time around.”