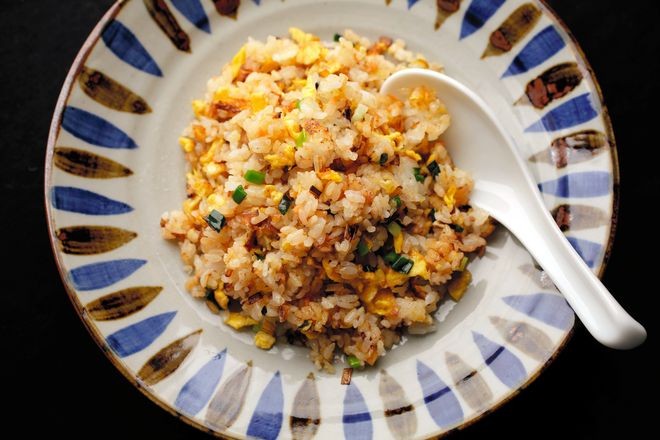 The aroma of browned green onion and soy sauce rises from the plate, and the golden rice is light in texture. There is a way to cook fried rice, known in Japan as “chahan,” that produces the ideal savor without having to master the tricky pan-shaking.

A closer look at what forms the flavor of fried rice shows the ingredients dotting the rice serve as the basis, and the power of oil and heat create the rich relish. Fried rice served at restaurants seems to contain a generous amount of lard and salt, but at home it is recommended to go easy on the oil and to season it in a way that the first mouthful may even taste mild in flavor.

This is also a way to keep you from growing bored of eating it. This week’s recipe attempts to strike a balance between health considerations and tastiness by coating the rice with a bit of oil before cooking and using a small amount of salty ingredient. Instead of seasoned flakes of cooked salmon, bacon or Chinese-style barbecued pork (“chashu”) may be used if preferred.

The key to the cooking process is the heat level. High heat browns the green onion and draws out its characteristic aroma, while fluffing up the egg. If the frying pan becomes so hot that smoke starts to rise, turn off the heat for the time being. You will get the hang of it once you make the dish a few times.

1. Cut naganegi in half lengthwise, cut further into strips that are 5 mm in width and then chop. Chop konegi into width of 5 to 6 mm.

3. Heat 2 Tbsp oil in frying pan and add naganegi. Over higher heat, mix without stopping and stir-fry for about 2 minutes to make green onion-flavored oil (PHOTO B).

4. Pour egg in pan, mix lightly and add rice while egg is still half cooked (PHOTO C). Loosen rice and cook by pressing it lightly to the pan with ladle.

5. When egg and rice are blended, turn off heat. Add sake, soy sauce, pepper, salmon flake and konegi. Turn on heat again and cook together. Check taste and add bit of salt if needed.

Up until the step of making green onion-flavored oil and stir-frying the egg, cook double the amount of ingredients. Remove half of the fried egg to a plate, add one serving of rice in the frying pan and cook. Then remove the rice and egg to another plate and cook the remaining egg and the other portion of rice in the pan.

After returning the first batch of cooked rice and egg to the pan, finish cooking the two portions together.

Katsuhiko Yoshida is the owner-chef of Jeeten, a restaurant in Tokyo’s Yoyogi Uehara offering Chinese home cooking.
Shinichi Ishikawa is a professor at Miyagi University specializing in molecular cooking science.

There are two kinds of rice starch: “gelatinized starch” that is sticky when heated with water, and “retrograded starch” that is hard as in cold rice or gelatin noodles. The two types are intermingled in each grain of fried rice, and the disparity in the texture may be the factor that keeps us from not growing tired of eating it.