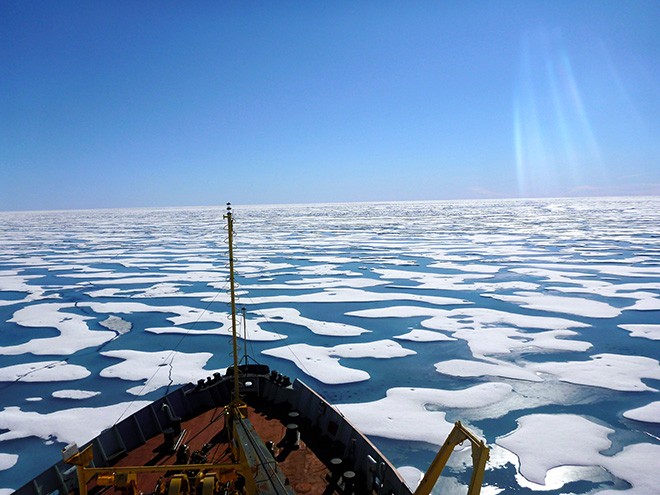 The Japan Agency for Marine-Earth Science and Technology (JAMSTEC) will begin building a new massive icebreaker in fiscal 2021 to conduct research in the north polar region.

It comes as Arctic research increases in importance for scientific reasons amid the changing climate and for geopolitical reasons as well, as the melting sea ice reveals new resources and affects global trade routes.

The research vessel, which comes with a total price tag of 33.5 billion yen ($306 million), is expected to be as large as Shirase, the icebreaker Japan has used for research in Antarctica.

JAMSTEC hopes the new vessel will make it possible for researchers to reach the North Pole and conduct winter-season observations in the Arctic Sea that have not been previously done.

Observers say the effects of global warming on the Arctic Sea have been extreme and are only increasing.

“Change in the Arctic Sea is not a problem of a far-flung region,” said Hiroyuki Enomoto, vice director of the National Institute of Polar Research. “Rather, it impacts the entire globe, including Japan.”

The effects of climate change in turn make the region increasingly important geopolitically, which has prompted many other countries to dispatch their own Arctic research icebreakers.

According to JAMSTEC’s plan, the new vessel will be 128 meters in length and 23 meters in width, and will weigh in at 13,000 tons. It will be capable of navigating through 1.2-meter thick ice, compared to Shirase, which can break 1.5-meter thick ice.

The new vessel will be equipped with a helicopter, a drone and an autonomous underwater vehicle. It will have capacity for 99 people and can conduct observational operations all season long.

JAMSTEC, which will operate the icebreaker, expects it to come into service in 2026.

The agency has relied on Mirai, an oceanographic research vessel converted from a nuclear-powered vessel called Mutsu, for observations in the Arctic Sea.

But because Mutsu was launched roughly half a century ago, in 1969, Mirai has become worn out.

Moreover, Mirai is not capable of breaking ice, making it impossible to conduct observations in winter. The vessel has reached a latitude of 79 degrees north, but not much farther.

The science ministry considered assigning Shirase for Arctic observations in addition to its roundtrip to Antarctica.

But the idea was scrapped because it would cause too much strain on Shirase, depriving crew members of training time and the ship from undergoing maintenance.

The ministry set up a review committee to discuss its Arctic Sea observation policy, which drafted a report at the end of last year.

“It is appropriate to build and operate a vessel that is capable of breaking ice immediately” to conduct observations in the sea ice where there is very little meteorological and ocean data, it said.

Enomoto said it is important to observe the water temperature and the salt density below the sea ice, in particular, because they are related to the heat and moisture vented into the atmosphere and the ocean water cycle.

That makes observation missions necessary in establishing accurate predictions about global warming and the sea ice melting, he said.

Arctic observation can also lead to a better understanding of typhoon paths and cold waves that would approach and hit Japan.

COUNTRIES RACE TO THE NORTH

A massive amount of ice in the Arctic Ocean, about 90,000 square kilometers--almost equal to the size of Hokkaido--has disappeared every year due to global warming.

Since the beginning of the 21st century, vessels have been able to navigate the Arctic waters by passing along the coast of Russia during the summer months when the sea ice melts.

The vessel route is significantly shorter than the southbound route that goes through the Indian Ocean, by about 40 percent.

Ships traveling the Arctic route also have a low risk of being attacked by pirates.

According to the transport ministry, the number of tankers and cargo ships carrying natural gas through the northern route continues to increase.

The United States announced it will procure a new icebreaker to conduct research because the Arctic route will become “the Suez Canal of the 21st century.”

Arctic coastal countries such as Russia and those in Northern Europe have taken similar steps.

China, too, has expressed interest, calling the Arctic passage “the Silk Road on ice,” and is proclaiming itself a “nearby country of the Arctic.”

South Korea built an icebreaker in 2009 to start meteorological observations and conduct research of natural resources.

The importance of the Northern Sea Route has grown even more significantly after a large container ship became stranded in the Suez Canal in March, blocking the passage and forcing many other vessels to get stuck.

Many countries are diligently researching not only the sea ice but also the Arctic’s untapped resources.

A fourth of the world’s yet-to-be-discovered natural resources, such as oil and gas, are believed to lie under the soil of the Arctic Ocean.

“The north polar region has become increasingly critical in terms of geopolitics, and each country has announced its key policy regarding the region one after another,” the science ministry said in the recent report, which gave off a sense of increasing urgency.

However, with the new vessel, Japan aims to first conduct observation on sea ice and collect meteorological data.

Under the plan, researchers will use radar to monitor the distribution and location of ice as far as 10 km.

Scientists will use an aerial drone and an autonomous underwater vehicle to measure the ice distribution from both above and below the sea.

By collecting data on ice thickness, which is hard to measure from satellites, researchers hope to determine whether the vessel can break the ice to move forward or if it should avoid the area.

Other countries have already collected similar data, but have not shared it, according to JAMSTEC.

Japan will encourage other countries to share their data, JAMSTEC said.

“By having a research vessel that can break ice, we will be able to convince other countries,” said Eisuke Akane, who leads a JAMSTEC research group.