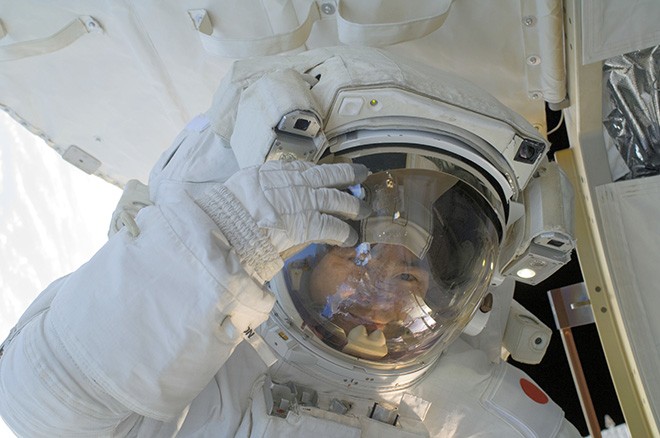 Japanese astronaut Akihiko Hoshide carries out a mission outside the International Space Station in 2012. (Provided by the Japan Aerospace Exploration Agency)

The Japan Aerospace Exploration Agency may soon not have its requirements for astronauts down to a science anymore.

JAXA is considering scrapping its mandate that prospective astronauts have college degrees in science to find the right people for increasingly diverse missions.

"We want to ease the requirement of academic qualifications and offer people with various backgrounds a chance to become astronauts.”

Under the plan, pilots and computer engineers with degrees in non-scientific fields may also be eligible to apply for JAXA’s first recruitment of astronauts in 13 years scheduled for this autumn.

The agency wants to find individuals capable of flexibly carrying out a variety of missions as space development is extending from scientific research and long-term stays on the International Space Station to lunar exploration.

JAXA has recruited astronauts five times. Each time, it has required applicants to have university degrees in science, engineering or medicine and more than three years of work experience in the fields of research and development.

But the agency is considering easing required qualifications for applicants for astronauts in the next recruitment session, Kawasaki announced at an online event in February.

The change, he said, is aimed at allowing graduates of junior colleges, technical colleges and vocational schools as well as those with non-science degrees to apply for the position.

He added that JAXA may also accept applications from those with more than three years of work experience in non-scientific fields and might no longer require candidates to work at least 10 years at JAXA after joining the agency.

JAXA has limited applicants for its astronaut program to university science graduates because they needed scientific knowledge and skills when conducting experiments aboard U.S. space shuttles and during extended stays on the ISS.

The same goes for astronauts at NASA and European space agencies.

“I’ve worked with astronauts from various countries, and all of them had degrees in science,” said Koichi Wakata, an astronaut who became the first Japanese commander of the ISS in 2014.

“I think it’s only natural for astronauts to be required to have scientific knowledge when flying spacecraft, conducting experiments and operating equipment.”

But as space development is shifting its focus to lunar exploration, astronauts will likely need to carry out a range of missions, such as operating a rover and scouring the moon's surface for water.

Because the moon is far more distant than the ISS, astronauts on lunar exploration missions will also be required to be capable of taking appropriate actions to survive in extreme situations without communications between space and the ground and shipments of supplies.

To further the sustainable development of space, they will also need to be skilled at sharing their experiences with many people.

But astronauts are still required to have scientific knowledge and skills and JAXA may maintain the requirement for its astronauts to have university degrees in science for the time being before easing it.

The agency is also considering assessing only the aptitude candidates have for being astronauts during a screening process and changing training programs for successful candidates to allow them to acquire necessary knowledge and skills later.

JAXA plans to gather opinions from the public about the easing of the required qualifications for astronauts before making a final decision on the matter, an official of the space agency said.

“Staff from 15 countries have joined missions on the ISS, but astronauts will need to work with people from more nations,” said Wakata. “The next generation of astronauts are strongly required to be flexible and adaptive enough to be able to team up with anyone and willing to take on new tasks.”