Japan to release ‘treated water’ from Fukushima plant into the sea

More than 1,000 tanks hold contaminated water at the Fukushima No. 1 nuclear plant on April 12. (Takahiro Kumakura) 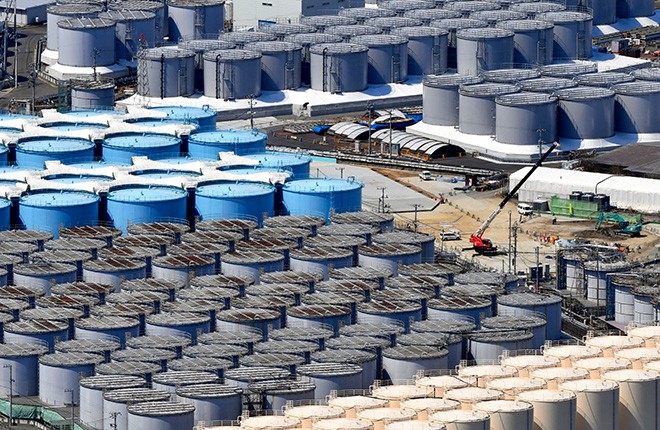 The government on April 13 formally decided to release more than 1 million tons of contaminated water from the crippled Fukushima No. 1 nuclear plant into the sea, despite fierce protests from fishermen.

Prime Minister Yoshihide Suga said the discharge of the treated radioactive water was a “realistic” choice after a meeting of Cabinet ministers tackling the issues of decommissioning the nuclear plant and dealing with the contaminated water that has filled storage tanks at the site to near capacity.

“How to dispose of treated water is an issue we cannot avoid while proceeding with the decommissioning of the Fukushima No. 1 nuclear plant,” Suga said. “The government will ensure the safety of the water to a level that goes well within the standards and take thorough measures to address potential damage from negative rumors about local products.”

This is the government’s first decision on a disposal policy concerning contaminated water accumulating at the plant, operated by Tokyo Electric Power Co. It will be about two years before the water is actually discharged into the sea.

Local fishermen have vehemently opposed the release of the water into the sea, citing potential damage to their products and livelihoods.

TEPCO in 2015 pledged that it would not dispose of the radioactive water “without gaining an understanding from stakeholders” during talks with fishermen.

Asked about that pledge, TEPCO President Tomoaki Kobayakawa said April 13: “Gaining an understanding is the most important thing. We will provide a full explanation.”

At the meeting that lasted only six minutes, the governor said: “The issue of the treated water has been a huge challenge when the prefecture is struggling to rebuild. We will give our view after carefully studying the central government’s policy.”

Around 1.25 million tons of contaminated water has been produced since the triple meltdown at the plant in March 2011. About 170 tons of rainwater and groundwater comes in contact with melted nuclear fuel inside the damaged reactor buildings every day.

The water has been kept in more than 1,000 tanks after being treated with multi-nuclide removal equipment, known as ALPS.

TEPCO built extra tanks in December to hold up to 1.37 million tons at the site. With no more space left, the storage tanks there will be full in autumn 2022, according to the utility.

The contaminated water will be treated again with ALPS before it is discharged. Many of the tanks contain highly radioactive water—up to 10,000 times the safety standard for the release—because the ALPS system did not function properly for some time.

ALPS will be used again to treat the extremely toxic water.

ALPS, however, cannot remove tritium, a radioactive form of hydrogen, from the water. The tritium will be diluted with seawater to bring its radioactivity level to 1,500 becquerels or lower per kiloliter.

The treated water is expected to be released incrementally in small amounts to allow for assessments of its impact on the environment.

The government and TEPCO will step up monitoring efforts and enlist cooperation from the International Atomic Energy Agency to try to gain international confidence in the release of the water.

The government said a council of experts on marine environment will be established to analyze the findings of the monitoring.

Based on actual financial damage, TEPCO will “swiftly and adequately” offer compensation to people and businesses whose products are shunned because of the negative image of the water discharge, according to the government.

The company will not limit the time, areas and industries concerning claims for damage.

TEPCO is expected to compile a detailed plan for the water discharge and build a facility for that purpose in the coming months. It also needs to gain approval from the Nuclear Regulation Authority, the government’s nuclear watchdog, for the water release plan.

The process is expected to take two years before the first drop is released.

The discharge of contaminated water after treatment has been practiced by nuclear plants in and out of Japan.

The Japanese government chose the option to discharge the water into the sea, rather than release it into the atmosphere after evaporation, to make it easier to monitor the tritium.