Survey: 94% want to limit or bar spectators from Olympics 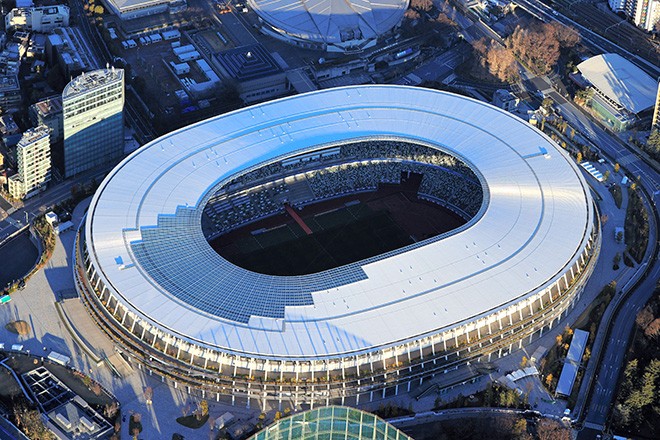 The new National Stadium in Tokyo, the main venue for the Tokyo Olympics, on Jan. 1 (Asahi Shimbun file photo)

A staggering 94 percent of survey respondents said the Tokyo Olympics organizers should limit the number of spectators allowed inside venues or have none at all, an Asahi Shimbun poll shows.

In a nationwide telephone survey conducted on April 10 and 11, 49 percent of respondents said the number of spectators at the Games should be restricted. Another 45 percent said they believe “no spectators should be allowed.”

Only 2 percent said the Games should be held “with the number of spectators as usual.”

The Games’ organizers, including the International Olympic Committee, announced in March that they will not allow in spectators living outside the country.

The organizers are expected to outline a general policy about an upper limit on the number of spectators by the end of April.

Among people 49 or younger, a larger proportion said the Games should be held without spectators. But for those 50 or older, more said the number should be restricted.

Among those 70 or older, 57 percent said the number of spectators should be restricted, while 33 percent oppose having spectators.

The survey also asked respondents to choose the best of three options regarding holding the Olympics.

Twenty-eight percent said they think the Olympics “should be held this summer.” In the previous survey conducted in March, 27 percent chose that option.

“Holding the Games as scheduled” has been the least popular option as novel coronavirus cases have again surged in Japan.

It received 630 valid responses, or 54 percent, of the 1,157 landline numbers of households with at least one eligible voter each that the survey contacted.

There were 921 valid responses, or 46 percent, from 2,006 mobile phone numbers of eligible voters that were called. The valid responses totaled 1,551.