Golf industry hoping to cash in on Matsuyama's win at Masters 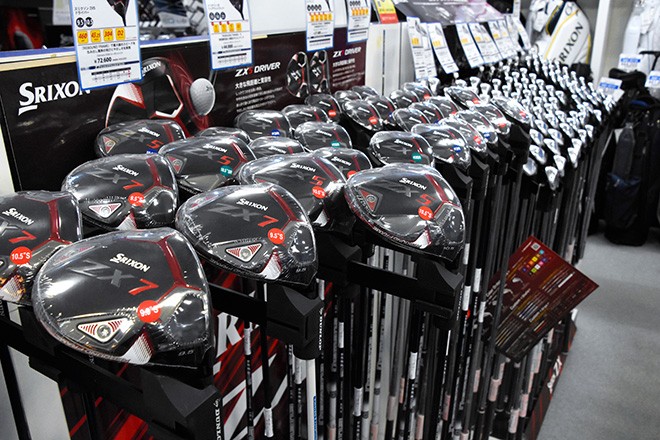 Srixon ZX series drivers, the same model that Hideki Matsuyama played at the Masters, are seen for sale in Osaka on April 12. (Kanako Tanaka)

Matsuyama's unprecedented triumph at the Masters in Augusta, Georgia, on April 11 could unleash a resurgence in the popularity of golf in Japan, which fell on hard times after the collapse of the bubble economy in the 1990s.

Satoru Yamamoto, the president of Sumitomo Rubber Industries Ltd., which makes the Srixon golf clubs and balls that Matsuyama plays, exploded in joy at his accomplishment.

“Matsuyama and our company have been united in battle, and his great efforts bore fruit,” he said on April 12. "Related staff and all the other employees were very happy to hear the news.”

In 2013, just after Matsuyama turned professional, its affiliate Dunlop Sports Co. signed a sponsorship agreement with him.

In 2018, Sumitomo Rubber Industries absorbed the affiliate and currently is in charge of Matsuyama's sponsorship deal.

The company employees have been incorporating ideas of professional golfers in club development as much as possible. They listen to their requests for golf products by accompanying players on staff on their respective tours.

But they said that Matsuyama makes more requests for clubs and other products than any other player.

The golf manufacturer has been creating new clubs based on those requests by using new materials still under development in Japan, and is asking golfers to test them out.

The players, however, make final decisions on which company’s product they will put in play.

“In this year’s Masters, Matsuyama played Srixon products, so our employees are on a high,” a company public relations official said.

They hope that sales of the clubs that Matsuyama used in his Masters win will be boosted and that the popularity of the Srixon brand will be lifted in the United States.

In Japan, the number of golf courses increased during the bubble period, and peaked at 2,460 facilities in 2002, according to the Japan Golf Course Management Association.

According to the internal affairs ministry, the number of golfers in Japan dropped from 17.84 million at the peak in 1991 to 8.9 million in 2016.

The golf-related market has also been on a downward trend. According to the economy ministry, the market size, including golf-related product sales and green fees, totaled slightly more than 1.3 trillion yen in 2018, half the figure in 1996.

Golf is still popular even amid the pandemic because it is played outdoors without a crowd.

But Yano Research Institute Ltd. expects that domestic sales of golf-related products in 2020 will shrink by 10 percent from the previous year.

“The business is still in a difficult situation,” said an official of Mizuno Corp., a major sporting goods manufacturer. “I hope that Matsuyama’s victory will energize the industry.”

On the Tokyo Stock Exchange on April 12, the stock price of Value Golf Inc., a golf course booking operator, soared by 19 percent at one point from the closing price on the last trading day of the previous week.

News of Matsuyama’s victory set off a buying spree of golf-related issues.