Onsen-steamed custard pudding in Beppu picked as best in Japan 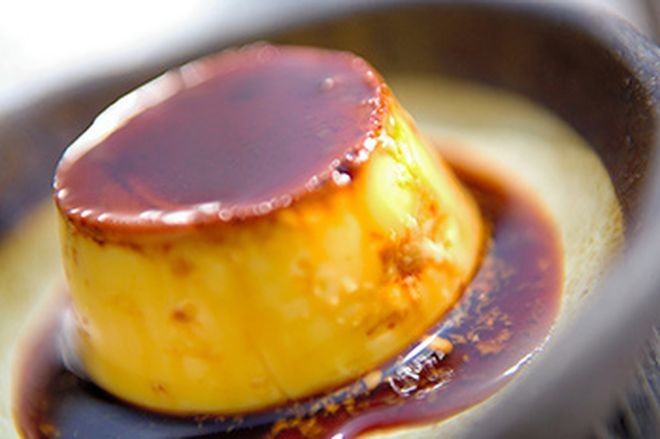 The Jigoku-mushi Purin custard pudding available in the Myoban onsen hot spring resort ranked first among local creme caramels in a survey. It is sold by Okamotoya Baiten. (Provided by Recruit Lifestyle Co.)

The Jigoku-mushi Purin, or “hell-steamed custard pudding,” is so devilishly delicious that it topped the list in a nationwide survey on which local creme caramels people most want to buy.

The dessert is cooked in the steam of hot spring water that is available at the Myoban onsen resort in Beppu, Oita Prefecture.

“Its bitter caramel sauce and rich flavor (of the custard) are addictive, while it is slightly firm like traditional ones,” according to the Jalan travel information magazine.

The magazine, published by Tokyo-based Recruit Lifestyle Co., conducted a survey in February to pay tribute to “Purin Day,” which falls on the 25th of every month and is registered by the Japan Anniversary Association.

The online survey asked 1,046 people in their 20s through 50s in the nation’s 47 prefectures which creme caramel they most desired.

Of them, 29.2 percent said they want to order the Jigoku-mushi Purin sold by the Okamotoya Baiten shop.

“(Custard puddings) are drawing increased attention. At least 70 percent of the respondents said if they come across locally made creme caramels in sightseeing destinations, they would love to try them,” a Jalan representative said.

“The Jigoku-mushi Purin from Beppu is especially beloved for its simple but rich taste that is achieved when it is cooked in the steam rising from the natural hot spring,” the representative added.

The Jigoku-mushi Purin custard pudding available in the Myoban onsen hot spring resort ranked first among local creme caramels in a survey. It is sold by Okamotoya Baiten. (Provided by Recruit Lifestyle Co.)