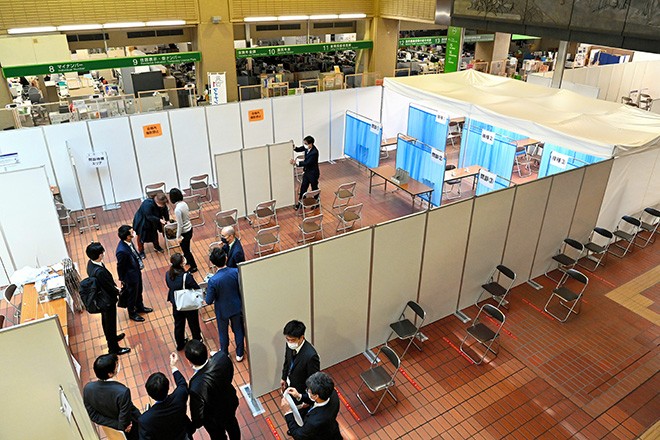 A vaccination center for elderly people opens at the Hachioji city office in western Tokyo on April 12. (Pool)

New COVID-19 cases in Tokyo surged by 111 from a week ago to 510 on April 13, topping 500 for the first Tuesday since early February, metropolitan government officials said.

The 510 new cases pushed the daily average for the week in the capital to 492.0, or 124.0 percent of the figure for the preceding week, far higher than the metropolitan government’s goal of reducing the average to 70 percent of the previous week.

The last Tuesday for the count to exceed 500 was on Feb. 2, when the tally was 556 amid the third wave of novel coronavirus infections.

The number of serious cases in Tokyo requiring ventilators or extracorporeal membrane oxygenation, also known as an ECMO lung bypass machine, decreased by one from the previous day to 41 on April 13, the officials said.

On April 12, Tokyo confirmed a record high 61 people infected with variant strains. With the ratio of the more contagious N501Y variant increasing, the metropolitan government has urged residents to take stricter anti-virus measures.